What lies ahead for the Asian Ethylene Market in 2020?

Revisiting 2019
2019 started with uncertainty amid escalating trade tensions between the United States and China. Feedstock prices (naphtha, propane, butane) were volatile amid complete sanctions on Iranian crude oil in May 2019 and drone attacks on Saudi oil production facilities in mid- September 2019. Global economic uncertainty and ongoing trade tensions throughout 2019 resulted in an overall slowdown in ethylene derivatives demand, especially from the key China market. Adding to the challenge, ethylene supply increased with several new steam crackers, methanol-to-olefins (MTO) capacities, and coal-to-olefins (CTO) capacities coming onstream in 2019. Two crackers in South Korea and one cracker in Indonesia also completed expansions in 2019. Furthermore, the new US Enterprise ethylene export terminal started operations in late 2019 and started to ship excess capacities to Northeast Asia. Due to these factors, the Asian monomer market ended 2019 on a bearish note with non-integrated cracker margins becoming negative for the first time in six years in the fourth quarter of 2019. Integrated cracker margins were also negative for the first time in almost 10 years, prompting several crackers in Asia to reduce operating rates at the start of the new decade. 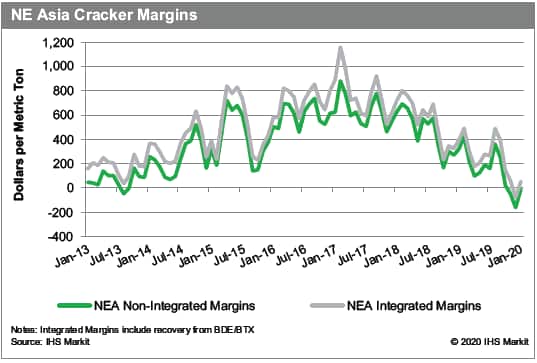 Entering 2020
The new decade started with some optimism as the United States and China signed phase one of a trade deal on 15 January. However, this was soon overshadowed by concerns about the worsening situation associated with the spread of the coronavirus in China over the Lunar New Year holidays in late January. The Chinese government imposed a mandatory extension of holidays to 3 February, and to 9 February in some cities. The national government has also imposed transport restrictions in a bid to contain the spread of the virus. On 30 January, the China Council for the Promotion of International Trade (CCPIT) announced that China is offering force majeure certificates to local companies if they are unable to fulfill their international contractual obligations due to the coronavirus outbreak.

Economic and Energy Outlook
The global economy dodged a recession in 2019, and the current year began with both cautious optimism and significant uncertainty. On 3 January, a US drone attack killed Iran's top military leader, Qasem Soleimani, in Baghdad. Iran subsequently retaliated with missile attacks on US bases in Iraq. While there are likely to be further actions on both sides, neither the United States nor Iran want an all-out war. The reaction in oil and financial markets has been somewhat limited. Oil markets are still oversupplied, and the vulnerability to an oil shock in the United States and global economies is much less than a few decades ago. It would take a massive and sustained spike in oil prices to bring the global economy to its knees.

In late January, the rapid spread of the coronavirus in China and other countries raised concerns about slower oil demand and economic growth. Several international flights to China have been suspended since late January amid the outbreak. The estimated economic impact of the SARS outbreak in 2003 was a reduction of approximately 1% in China's GDP in 2003. In response to the spread of the new coronavirus, IHS Markit forecast of China's real GDP growth has been reduced by 0.4 percentage point to 5.4% in 2020. In a more severe scenario, with confinements and plant closures extending, China's growth could drop to 4.2% this year in 2020. As with the current epidemic, SARS was a coronavirus and its outbreak coincided with the Lunar New Year holiday. IHS Markit projects that the potential downside impact on global oil demand is greater relative to the SARS outbreak in 2003 as China is a much larger oil market now. China's total oil demand in 2019 was approximately 13.9 million barrels per day compared with 5.6 million barrels per day in 2003. Although there are too many unknowns currently to be certain about the impact, our initial estimate is that Chinese demand could drop by 250,000 barrels per day or more in 2020 if the outbreak and related travel restrictions last for six months. Coupled with rising oil production from the United States and other non-OPEC producers, this will put persistent downward pressure on short-term crude oil prices.

Ethylene Outlook
In 2020, new capacity additions will continue, dominated by steam crackers in China. Also, crude oil-tochemicals (CTOC) investments made by Asian refiners were completed recently and achieved on-specification production. Zhejiang Petrochemical Phase 1 achieved on-spec production of monomers in mid-January, with Phase 2 expected to be completed in 2022. Hengli Petrochemical achieved on-spec ethylene production in late January. In addition, there are four more mega crackers with at least 1 million metric tons (mt) of ethylene capacity coming onstream in 2020. Please refer to table below for a full list of new crackers and expansions in 2020.

On the demand side, it is estimated that 2020 domestic demand will grow by approximately 2.5 million mt to 48 million mt in Northeast Asia and by 0.8 million mt to 12.5 million mt in Southeast Asia. China's demand accounts for 44% of total Asian ethylene demand in 2020. It will be difficult for additional supply from these new builds to be absorbed immediately, especially with the coronavirus outbreak. IHS Markit anticipates that the average operating rate in Asia will fall below 90% in 2020 and could fall further depending on demand recovery after the epidemic. 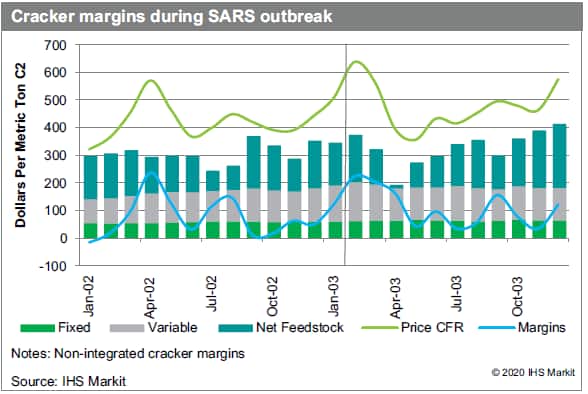