What if a universal public drug plan were to become a reality in Canada?

Despite contradicting claims from those opposed to a universal drug plan in Canada, "Pharmacare" could generate significant savings for the healthcare system, and may soon become too tempting to ignore.

On average, an estimated CAD7.3 billion (USD5.95 billion) in savings could be achieved in Canada through a universal drug plan, according to a study published last month in the Canadian Medical Association Journal (CMAJ). Researchers from the University of British Columbia concluded that even under the worst-case scenario, CAD4.2 billion could be saved rising all the way to CAD9.4 billion under best-case conditions.

They used information regarding prescribing patterns, costs of drugs by therapeutic category, and sources of funding to assess the impact of universal public coverage of prescription drugs (aka Pharmacare) on individual provincial governments, private payors, and the healthcare system as a whole.

At first glance these significant savings claims seem counter intuitive assuming there would be a potential surge in prescription drug utilisation from newly insured patients. However the authors of the study argue that a universal drug benefit programme would support more cost-effective product selection through a tiered co-payment evidence-based formulary. In addition, the purchasing power of a consolidated single payor could notably lower drug prices further through negotiations and contract agreements. Examples of that can be seen from other international comparator countries with a consolidated drug plan, such as the United Kingdom. 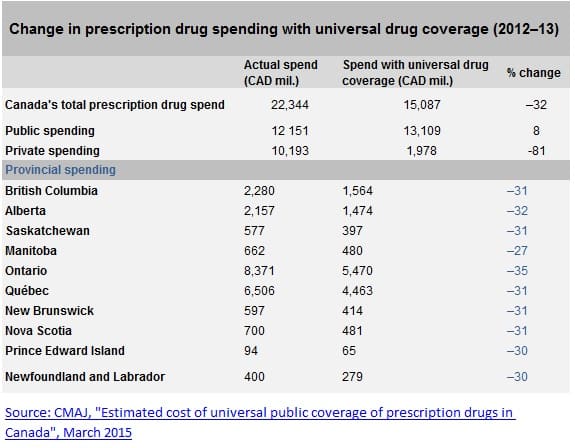 Pharmacare could reduce drug spending by 32%
Based on the model used in the study, Canada's expenditure on prescription drugs would have been CAD15.1 billion in 2012/13 - some CAD7.3 billion less (32%) than the actual spending figure of CAD22 billion. Savings were generated from an estimated 11% impact of reduced generic prices, 11% impact of reduced brand name prices, and a 12% reduction as a result of cost-conscious product selection. Conversely, coverage for those who were previously uninsured would increase spend by an estimated 3%. Interestingly, Ontario, the highest ranked province by prescription drug spend, would realise the greatest savings - approximately a 35% reduction to CAD5.47 billion.

Private spending to realise 81% drop versus 8% increase for public
With universal drug coverage, private drug spending is anticipated to decline by CAD8.2 billion (an 81% reduction), compared with an 8% increase in government costs (CAD958 million). The majority of increased public expenditure stems from a few drug classes, including biologic anti-inflammatory drugs for rheumatoid arthritis, psoriasis, and Crohn's disease, that would contribute CAD330 million to the increase, followed by antibiotics (CAD173 million) and hormonal contraceptives (CAD157 million).

The argument in favour of Pharmacare gets stronger...
Canada remains the only developed country that has universal health insurance, without universal drug coverage. The current system is extremely fragmented leaving access to medication beyond the reach of many Canadians that are unable to obtain affordable drug coverage either because they fail to qualify for public plans or have limited access to employer-based private insurance. Nearly 10% of Canadians report that they are unable to afford their medication.

If government costs for implementing Pharmacare are minimal compared with the overall savings to the healthcare system; the argument in favour of a universal drug plan just got considerably stronger. Any concerns regarding the need to raise taxes significantly to accommodate a universal drug plan have been countered with evidence from this study that demonstrated the sizeable savings that could be generated from economies of scale, purchasing power of a single payor, and a more cost-conscious product selection process. According to the authors of the study, the CAD7.4-billion reduction in spend would bring Canada's per capita drug spend down to levels comparable with countries such as Austria, Italy, Spain, and Switzerland, although spending would still be higher than in other countries, such as New Zealand, Sweden, and the United Kingdom.

The Council of the Federation, comprised of the premiers from each of Canada's 13 provinces and territories, has launched several initiatives over the past few years, including the pan-Canadian Pharmaceutical Alliance that is responsible for an unprecedented universal agreement to cap prices for 18 generic drugs over three years that I wrote about last year, as well as combined negotiations on pricing for branded drugs. However, even the combined annual savings of USD315 million from these initiatives are negligible compared to the total savings that could be achieved with a single-payer drug benefit system. If Pharmacare does become a reality in the near future, the pharmaceutical landscape in Canada would be substantially transformed.