A sustained recovery in business conditions across Alberta & British Columbia was a bright spot for the Canadian manufacturing sector during 2018, driven by greater energy-related demand in both domestic and export markets. However, survey data from IHS Markit revealed that the outperformance narrowed rapidly in the final quarter of last year. There now seems little sign of a turnaround in January, with our latest survey providing a clear signal that manufacturing growth across Alberta and British Columbia has begun to falter.

At 52.2 in January, down from 54.0 in December, the IHS Markit Purchasing Managers' IndexTM (PMI®) for Alberta & British Columbia indicates the weakest overall improvement in manufacturing conditions since October 2016. A slowdown in manufacturing growth is expected to become more entrenched over the course of the year, despite tailwinds from new oil and gas projects.

IHS Markit forecasts a 2.2% rise in manufacturing output across Alberta & British Columbia in 2019, down from the 2.9% expansion seen during 2018.

The manufacturing slowdown is expected to centre upon a soft patch for Alberta (output growth of 0.9% in 2019), which contrasts with a relatively strong forecast for production in British Columbia this year (4.0%).

The latest PMI survey data indicate that the manufacturing sector of Alberta & British Columbia experienced slowing output growth and an outright decline in new orders at the start of 2019, sending a worrying signal for the near-term outlook. On a more positive note, the slowdown was accompanied with a welcome easing of cost pressures, suggesting that factory gate price inflation could moderate further in the coming months.

Moreover, the divergence with respect to new orders was notably downbeat. The latest reading saw the New Orders Index dip below the 50.0 no-change value for the first time since August 2016. Export sales also fell at the start of 2019, although the rate of decline was only marginal.

The latest survey points to a further slowdown in manufacturing payroll growth across Alberta & British Columbia in comparison to the peaks seen in early-2018. PMI data provides an advanced guide to official manufacturing employment figures in the provinces, with the survey findings available around two months earlier than the official data.

The sharp peaks and troughs of staff hiring are clear in the following chart, and illustrate the highly cyclical nature of Western Canada's manufacturing sector. Manufacturing firms, with strong exposure to volatile trends in capital expenditure from the energy sector can find themselves operating on a 'feast or famine' basis, taking on staff sharply in a boom then needing to shed capacity when oil and gas prices decline. 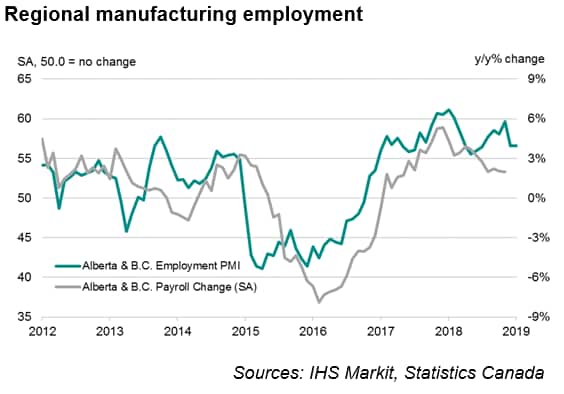 The recent muted PMI figures bode ill for the first quarter of 2019. At the start of last year, the soft patch for new orders had accurately anticipated the slowdown in manufacturing sales growth across Alberta & British Columbia, which hit a low of +2.0% year-on-year in April 2018. Moreover, the slowdown observed in manufacturing sales growth was signalled by the Alberta & B.C. New Orders PMI two months earlier than official data was available. 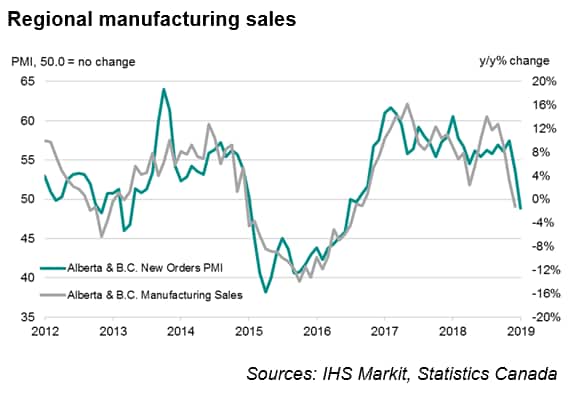 January's PMI data are consistent with a slight downturn in provincial manufacturing sales, following the slowdown seen at the end of 2018.

Despite the downbeat Manufacturing PMI readings, it is important to bear in mind that this data will not yet capture the impact of future investment plans, especially in relation to energy projects.

A number of interrelated factors are compounding in Alberta's oil sector to weaken the province's 2019 outlook.

A wide price gap between Western Canada Select (WCS) and West Texas Intermediate (WTI) differential in the last quarter of 2018 took a toll on economic activity in the province. Annual manufacturing sales growth turned negative in December, dropping at the fastest pace since October 2016, consistent with the latest Alberta & British Columbia PMI reading. The drop in sales also coincided with early-December's announcement of provincially-mandated oil production cuts aimed at narrowing the WCS differential.

Manufacturing sales in Alberta are expected to slow significantly from last year's robust 7.5% pace. And, amid retreating petroleum and coal manufacturing along with slower chemical product output, Alberta's manufacturing sector will gear down to 0.9% output growth this year, picking up to 1.3% in 2020.

Coinciding with more subdued PMI survey employment intentions, average hourly wage growth slowed from its early-2018 peaks, pointing to easing labour demand in the province. Annual employment growth has slowed since November, dropping to half a percent in January while the unemployment rate has risen back up to 6.8%. Overall, labour demand will perk up as oil ceilings are scaled back, but a performance to match last year's is unlikely, as employment in Alberta will shift down to average 1.0% growth this year and the unemployment rate will remain at 6.6%.

There are promising silver linings to an otherwise cloudy Alberta outlook. An early removal of the oil production ceilings in the province would do much to brighten the output outlook for 2019. There are encouraging developments on this front as the early easing of oil production cuts at the beginning of February pointed to oil inventories dropping faster than originally expected.

Additionally, the provincial government recently struck a deal to lease additional oil-by-rail capacity, which will help clear the backlog of crude. There are also indications that production cuts are pushing WCS prices too high, eroding the profitability of shipping Alberta crude by rail. This will add pressure on the provincial government to lift production ceilings and to reduce upward pressure on Canadian crude oil prices. The late-2019 completion of Enbridge's Line 3 replacement would similarly ease market access woes.

At the same time, major capital projects in Alberta are ongoing, including Imperial Oil's Aspen project and a recently announced $4.5 billion petrochemical plant. The province's trade outlook has also bucked the general slowdown trend, as Albertan exports- particularly of industrial machinery-have advanced at a steady clip.

Alberta will add the most drag to economic growth in Western Canada. While British Columbia is expected to experience its own, less severe, slowdown in key industries, increased non-residential investment in the province will offset weakness in housing markets and wood manufacturing.

Stricter borrowing rules and property tax changes at the provincial level took their toll on British Columbia's housing market. Price reductions in the Greater Vancouver Area (GVA) have been felt in both the new and existing home markets. In the existing home market, demand for housing has been laggard while new listings continue to pile up, increasing downward pressure on prices. The sales-to-new-listings ratio in the GVA fell to 43.3% in January, down from 66.2% a year prior. Soft home price inflation and laggard housing demand will diminish ownership transfer costs and dampen residential construction activity.

British Columbia manufacturing sales continue to advance, but at a muted pace as sales growth has been on a slowing track since July of last year. The province's largest manufacturing subsector, wood product manufacturing, has experienced retreating sales as housing demand cools domestically and in the US while the province's forestry industry grapples with two years of record forest fire seasons that have reduced annual allowable cuts. Yet, accelerating manufacturing of fabricated metal products has offset the drag from the wood product subsector. Going forward, the manufacturing sector is set to pick up the pace once more, with real output growth quickening to 4.0% in 2019 and hitting a robust 3.2% pace in 2020. 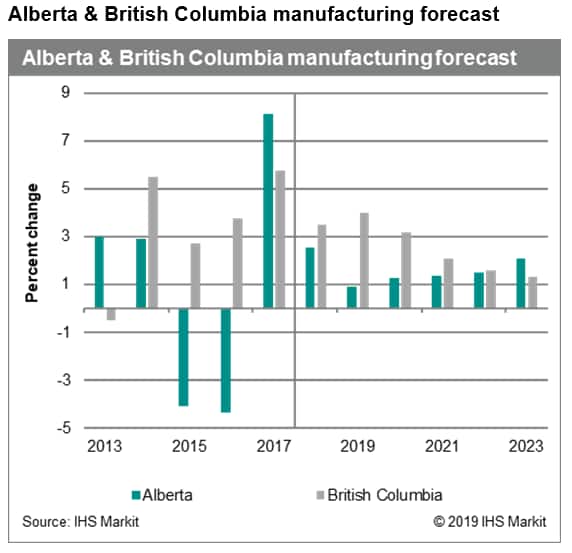 Spending in British Columbia non-residential construction will pick up the slack while residential investment slows. Construction is ongoing on the Peace River Site C Dam and work is expected to continue into 2024. More importantly, the $40 billion LNG Canada pipeline and liquification plant project, the largest private-sector investment in Canadian history, adds near-term upside to the province's business investment outlook and long-term prospects to natural gas output and exports.

The February release of the Canada Manufacturing PMI will be on the 1st March 2019. IHS Markit's Canadian Macroeconomic Service's Provincial Forecast and Analysis is released by month-end in May and November. Updates of key indicators to the forecast are produced mid-month January and July.