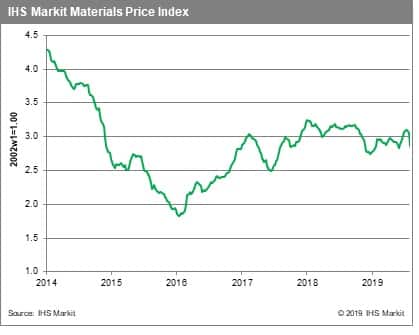 Iron ore led the retreat in commodity complex last week with prices collapsing 15.8%. A correction was overdue given globally weak finished steel prices, lower scrap prices, and signs of better ore supply. Brent crude prices were also hit hard by growing worries about world liquids demand, falling as low as $56.2/bbl during the week. Prices, however, found support at week's end as Saudi Arabia announced its intention to keep exports below 7 Mbbl/d. Non-ferrous metals fell 2.2%, with only nickel prices showing strength. Nickel rose 6.1% on speculation that Indonesia would advance a ban nickel ore exports, currently slated for 2021. Fiber prices dropped 4.8%, continuing the year-long slide towards a 10-year low that began with the first round of US tariffs on Chinese imports. Rubber lost 6.2% last week, another victim of trade volatility and weak global auto sales. Rubber prices are likely to re-test its 2018 low unless major producers intervene to restrict exports further.

Commodity markets will remain on edge into the fourth quarter given recent strength in the US dollar and the set of dates that promise continued volatility: a September target date for new US tariffs on Chinese imports, the October Brexit deadline and possibility of snap elections in the UK and Italy, an October threat of US tariffs on auto imports, and the 70th anniversary of founding of the Communist Party against the backdrop of protests.