It was another volatile week in markets, with both global equity and commodity prices retreating on the perceived vulnerability of the global expansion. The IHS Markit Materials Price Index (MPI) fell 2.0% last week, with eight of the MPI's 10 components declining, the most broad-based correction since early-June and the third consecutive w/w decline. October's correction means that commodity prices, as measured by the MPI, are again down for the year. 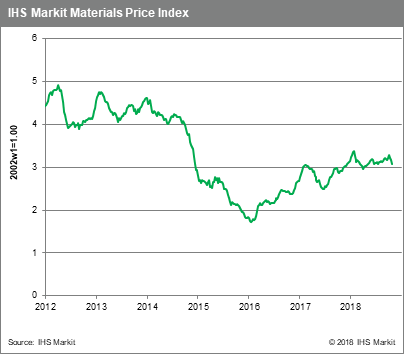 After surging 16.8% in August and September, oil has dropped 8.9% over the past three weeks. Last week saw Brent crude prices slide to $77.4 /bbl, partly prompted by reports that Saudi Arabia would fill the gap left by lost Iranian exports. Chemicals, having been driven higher by oil prices, are now following oil back down, dropping 5.2% last week and a cumulative -17.4% over the past three weeks. Lumber continued its correction with another big 6.6% fall. Since lumber prices hit $655/thousand board feet in May, prices have tumbled 55% and now sit at $298, a little over the 30-year long-term real average price. Raw ferrous prices have again bucked the recent negative trend, rising 0.9% w/w and which helped to boost bulk freight prices 1.7%.

Markets' whip-sawing action last week involved several interesting features: After a massive 4% daily fall at the start of the week, the Shanghai composite stock index rebounded after further stimulating policies in China were announced. The Yuan fell for the week even though it ended Friday up slightly at 6.94 to the US dollar. Perhaps the only true positive for the week was found in precious metals. Increased volatility has breathed life back into gold, which jumped 3.3% as investors sought safe haven assets. Markets will be focused on US data and politics for the next week with the October US employment report, the third quarter US employment cost index report and the US mid-term election all coming in the next seven days.