Weekly Pricing Pulse: The Beginning of the end

Our Materials Price Index (MPI) fell 1.6% last week. The MPI has now declined in seven of the past 13 weeks and consecutively over the past four weeks. Prices dropped for eight out of ten subcomponents, pointing to a widespread weakening in commodities once again. Nevertheless, commodity prices are still 94% above last year's levels and up 18% since the beginning of 2021. 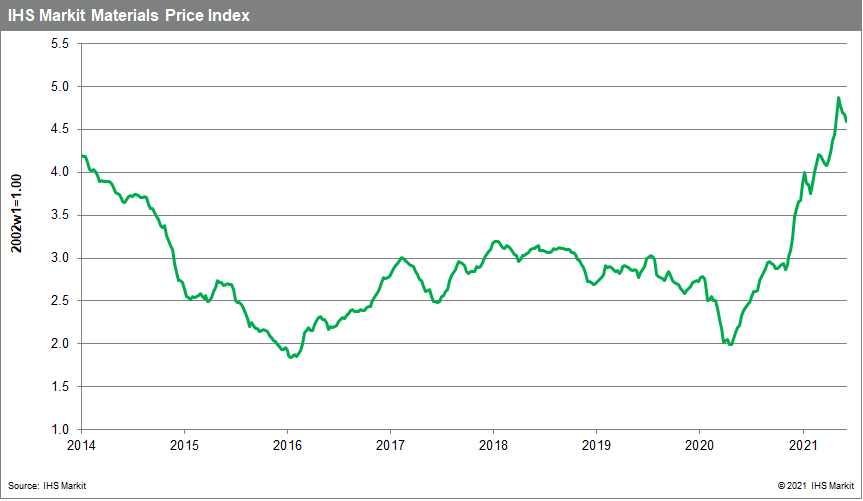 The largest declines last week were in freight rates and lumber prices. Freight rates recorded the second week of price declines on the back of worsening relations between Australia and China affecting iron ore shipments. China's desire to stabilize bulk goods prices also provided a cooling effect on iron ore prices, and subsequently shipments. For lumber, this was also a second consecutive weekly price decline, although not the largest. Despite a brief pause at the end of May, prices have been following a downward trajectory since the second week of May. In the span of a month and a half, prices rose 89%, reaching their peak at the beginning of May. In light of record-breaking prices, buyers increasingly began to stand on the sidelines, allowing a slight improvement in availability. Despite recent declines, prices for lumber have room to fall - they are still 240% above last year's levels and 24% above their previous all-time peak set just last September.

This past week provided more evidence that the year-long rally in commodity markets may finally be ebbing. However, despite the giveback, past commodity price increases continue to put pressure on producers. China's producer price index for May rose 9% year on year driven by increases in oil, non-ferrous, and iron ore prices, prompting action by the national government to rein in prices. In the United States, even the top-line consumer price index is showing a sharp acceleration in inflation rising 5.0% year over year in May (although the pace has eased on a month to month basis). Some of the fastest rising components were for vehicles and transportation. Similar to commodities, we do not think these increases will be sustained as markets adjust, a pattern we are beginning to now see upstream in supply chains for raw materials.