Weekly Pricing Pulse: The bearish backdrop proves too much for commodity prices

While fears of contagion from Turkey's financial crisis seemed to ebb last week, the rout in emerging market currencies and anxiety about the health of the global economy has investors fleeing to safer assets, creating volatility in commodity markets, as a result, our IHS Materials Price Index (MPI) slipped 0.7% w/w. 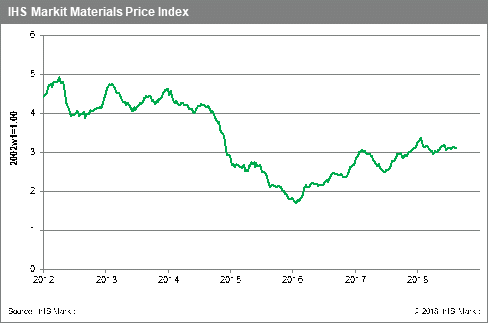 Chemicals prices managed to stay above water last week, rising 0.6%, despite the 1.8% retreat in the oil price. After being down all week, oil markets did rally last Friday on positive sentiment following comments by President Trump that hinted at an easing of trade tensions. Base metals, however, had a dire week. Copper fell below the key resistance level of $6,000/metric ton, which dragged down the entire nonferrous complex; the MPI's nonferrous metals index registered a 3.9% decline. After dropping 33% since May-end, lumber prices rallied by 4.5% w/w, as buyers dived back into the market, only the second gain in 12 weeks. Steel making raw materials, as captured in the MPI's Ferrous Price Index, fell 0.9% w/w last week, correcting after a brief rally. It will be interesting to see how steel markets react in the weeks ahead, futures are responding to rumours that Chinese winter production cuts of 50% would be introduced on 1 September.

Following announcements last week of US-China trade talks at the end of September, global markets seemed to breathe a sigh of relief as many major indices recovered some of the losses sustained in recent weeks. The slight easing of tensions is likely to allow emerging market currencies and commodities some respite from the surging US dollar. However, we expect another US interest rate hike following the meeting of the FOMC on September 26, which is likely to fuel further moves up for the dollar. There should be more clarity on the Fed's intentions after this week's meeting of central bankers in Jackson Hole. The bottom line, though, is that we see more volatility ahead in commodity markets.

RT @IHSMarkit: We are delighted to have made the @Forbes’ Best Employers for Women list! This is a great recognition of #IHSMarkitLife an…