Our Materials Price Index (MPI) climbed 2.2% last week, following a 1.3% increase the previous week. Price increases were widespread with nine of the MPI's ten subcomponents increasing. Commodity prices as measured by the MPI have more than doubled since April of last year. 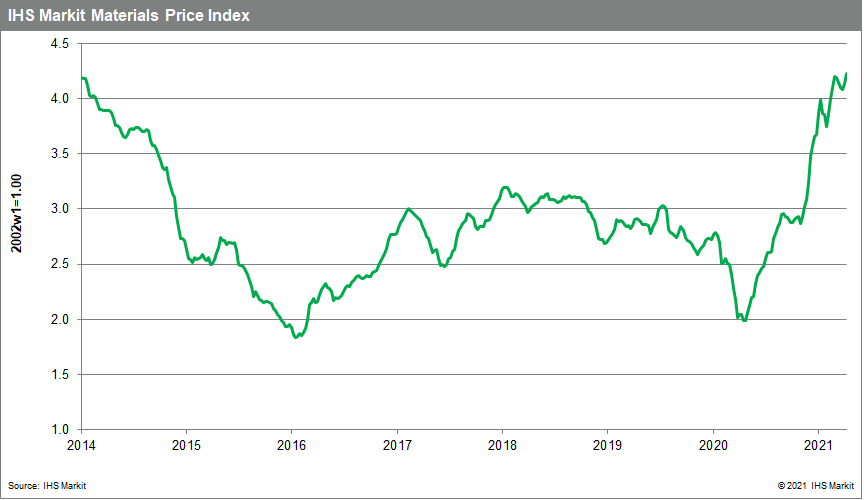 Lumber once again was a standout, jumping 13.7% for the week. Demand continues to outstrip supply, with prices soaring to record levels fully 25% above where they were in September, which were then an all-time high. Lumber demand is being driven by US single-family homebuilding and renovation and will remain elevated in the short-term considering the number of new single-family permits issued recently.

Ocean-going freight, the Achilles Heel of the global economy at the moment, saw rates rise 4.7%, marking seven weeks of consecutive increases capped by the Suez Canal blockage further straining global supply chains. Carriers expect the blockage will worsen the container shortage into May and pressure prices as shippers rush to get their orders in amid the supply uncertainty. Rubber was the one commodity area tracked in the MPI that fell last week. Prices dropped 4.5%, their largest one-week move since the correction in the market began back in early March. Prices for rubber are the lowest they have been since October 2020 but are still up 55.4% year-on-year.

Commodity prices have resumed their upward walk after a modest correction in March, much like in February after an equally mild correction in January. A slight retreat in the US dollar and good retail sales data for March in mainland China and the US (advanced estimate), plus solid data for March US industrial production has helped reinvigorate commodities. Still, for all the encouraging signs on the demand-side of markets, it is the continuing disruptions in supply chains that are keeping markets off-balance. Worse for the immediate future, signs point to the Suez Canal blockage creating fresh bottlenecks that will ripple through markets into May and perhaps beyond. The only solace in looking toward the summer is that absent some new shock, we believe conditions in supply chains during the second quarter are as bad as they will get.