Our Materials Price Index (MPI) climbed another 2.4% last week, its fourth consecutive weekly increase. This latest move sent the MPI to its highest level since January 2014. The MPI now stands 68% higher than in early March 2020. 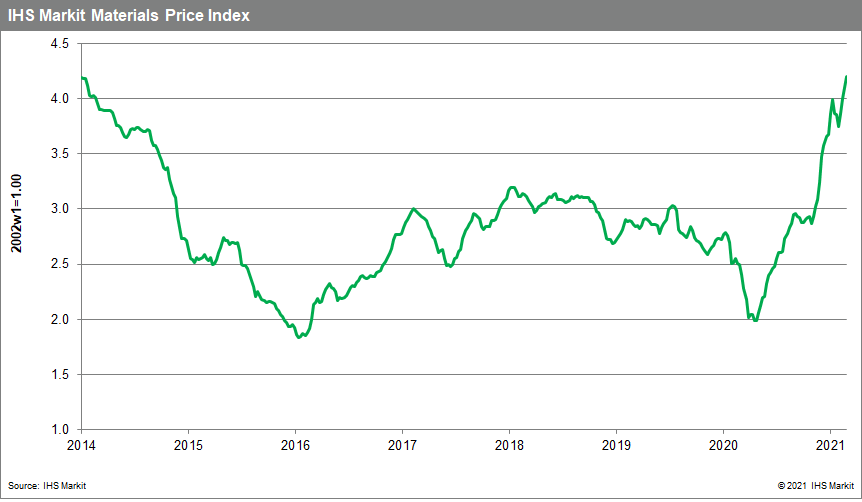 A large upward move in the steel making raw materials index was the primary cause of last week's price increase. Our steel index increased by 5.7% with iron ore prices reaching $175 per tonne as markets were buoyed by a continued strong demand outlook from mainland China and pressure by provincial authorities to reduced energy consumption and emissions. Steel scrap increased by 7.3% last week with US prices particularly buoyant on the back of tighter supply. The cold snap in Texas has caused collection problems in the United States creating a supply crunch. Steel freight rates were already elevated and these have been pushed even higher by the severe weather in Texas. Our DRAMS index increased 13.2%, the highest weekly increase since September 2013 as ongoing microchip shortages sent prices soaring. The index has increased for the past 14 weeks as an unexpected increase in demand from carmakers at the end of last year challenged supply chains, which were already tight because of strong demand from phone and computer manufacturers. Long semiconductor lead times suggests further upward price pressure into the second half of 2021.

Turbulent conditions continued in bond and equity markets as investors remain wary of a spike in inflation. A stronger than expected February US employment report and the promise of a huge third fiscal stimulus package reinforced fear of higher inflation on the horizon. However, the large sell-off in US treasuries seen in previous weeks slowed as investors paused to reflect on what the Federal Reserve will do to combat the recent turbulence in bond markets. This meant the rush towards commodities as a hedge against inflation also eased. However, there is still speculation that a new commodity supercycle is underway. To date, most of the increase in commodity prices has been absorbed in margins so that goods price inflation, although rising, remains muted. This said, increasing cost pressures reflecting the sharp rise in commodity prices over the last year guarantees a rise in goods inflation through at least the second quarter. Once higher goods price inflation becomes apparent in official data, the question will be whether investors will accept the risk or move further into commodity markets. The answer will determine whether the commodity price rally will continue across the second half of this year and into 2022.