Our Materials Price Index (MPI) climbed another 2% last week, its third consecutive weekly increase. It was another week when prices collectively recorded a significant weekly gain sending the MPI to a seven-year high. The MPI now stands 63% higher than in late February 2020. 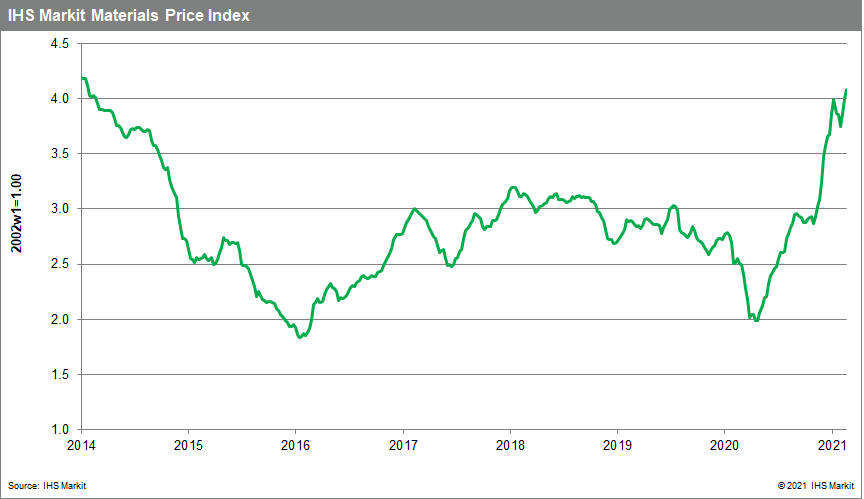 Eight of the MPI's ten sub-components posted increases last week with chemicals and industrial metals the major upward movers. Our chemicals index increased by 12.8% as the impact from winter storm Uri hampered chemical production in the United States. Almost 70% of US ethylene capacity was offline and propylene outages sent spot prices to a record 125 cents/pound. The disruption in US supply significantly reduced exports to Europe and Asia causing material shortages and price spikes in both regions. Metal prices continued to soar with our nonferrous index increasing 3.7% last week. Copper prices breached $9,000 a tonne for the first time since 2011 as the industry recorded the largest supply shortfall in seventeen years. Investor appetite was further fueled by expectations of a future rise in green infrastructure projects where copper will be an important raw material. There was some relief for materials prices last week as our energy index declined by 12.2% as milder weather in the US lowered demand for natural gas. This caused prices to dip 75% partially reversing the record 123% increase the week before.

It was a turbulent week in bond and equity markets as inflation fears spooked investors. The prospect of tighter monetary policy in the future led to a large sell-off in US treasuries and technology stocks. The volatility pushed investors further towards commodities as a hedge against inflation. It also fueled speculation that a commodity supercycle is underway. To date, most of the increase in commodity prices has been absorbed in margins so that goods price inflation, although rising, remains muted. This said, increasing cost pressures reflecting the sharp rise in commodity prices over the last year guarantees a continuing rise in goods inflation through at least the second quarter. Once higher goods price inflation becomes apparent in official data, the question will be whether investors will accept the risk or move further into commodity markets. The answer will determine whether the commodity price rally will continue across the second half of this year and into 2022.