Our Materials Price Index (MPI) increased 0.4% last week, its seventh gain in eight weeks. The rise was narrow, however, continuing a trend seen during May; only five of the sub-indices increased and only two - chemicals and fiber - showed more than fractional gains. Chemical prices played the biggest role pushing the MPI higher last week, rising 6.0%. For the second week in a row, the MPI would fallen if chemicals were excluded. 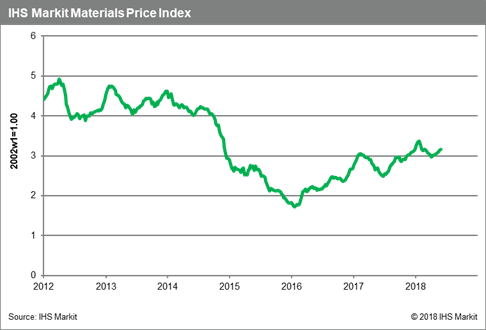 Propylene prices surged last week, increasing 12.5%, extending a bullish period now stretching back to early April. A brief two-day outage from an Enterprise PDH unit helped fuel the price rally, but fundamentals have been strong. Demand was robust throughout May, with inventories down; propylene stocks are at 75% of their 5-year average. Additionally, some of the strength in chemicals can be tied to the run-up oil prices during May - a trend that stalled last week. Oil ministers for Saudi Arabia and Russia indicated they are willing to increase production, explaining the 3.5% drop in crude prices. The MPI's fiber index has been riding higher because of stronger cotton prices. Good demand and weather (no rain in Texas and too much rain in parts of China) have lifted cotton prices by more than 9% in the past two weeks.

While commodity prices have rebounded, their recovery since April has lacked the breadth and strong upward momentum that characterized the rally in 2016 and 2017. Indeed, news that the Vienna Alliance may begin to relax restraints on production bolsters our view that a sustained rally in commodity prices is unlikely. Growth would also appear to be peaking. May's Purchasing Manager Index reports were still good, but do show global manufacturing activity losing a little steam since the first quarter. And in the United States, a strong May jobs report supports the case for continuing interest rate increases, with the next move expected during the FOMC's next meeting on June 12-13. Tighter financial markets will undercut both physical and investor demand. If oil prices do not rise further, growth in manufacturing slows and investors begin to move to safer asset classes, a sustained rally in commodity prices looks unlikely.