After an extended sell off, global equity markets rebounded late last week. Promise of stimulus out of China and positive words from President Trump after a telephone call with General Secretary Xi Jinping helped stabilize markets and the Yuan. Our Materials Price Index (MPI), however, continued to fall, declining another 1.6% last week. The weakness in commodities was driven mainly by losses in oil and chemical prices. 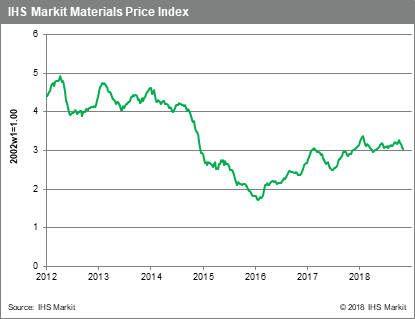 Oil's 17% fall since Brent hit $86 /bbl. in early October has been a major driver of the 7.3% decline in the MPI over the past month. Oil fell another 3.3% this past week, as it emerged that Washington will give waivers to eight countries that buy Iranian crude, with other countries attempting to set up an alternative payments mechanism to circumvent the US sanctions. Chemicals fell in step with oil, declining 4.8%. Bearish global sentiment weighed on copper and other non-ferrous metals with prices collectively sliding 1.7%. Lumber pared back some recent loses, rising 4.7%. (Lumber prices are still down 52% since their late May peak).

Despite the bounce back in equity markets late last week, bearish forward signals are still present. The October J.P.Morgan Global Manufacturing PMI registered 52.1, its lowest value in since August 2016. And despite pockets of positivity in the news from China, its headline manufacturing PMI at 50.1 shows activity stagnating. Moreover, export orders continue to contract. The US manufacturing PMI, however, hit 55.7, a 5-month high, boosted by a sharp rise in new orders and solid production numbers. Good US jobs data out last week also points to a strong manufacturing sector. US unemployment remained steady at 3.7% with average hourly earnings up 3.1% y/y in October, their fastest rate of growth since 2009, adding greater justification for another US interest rate hike in December.