Weak economic data drove commodity prices lower last week. Markets cooled off due to housing and inflation data coming in below expectations and a downward revision to US GDP. Our Materials Price Index (MPI) fell 1.0% last week, offsetting the 0.7% climb in the previous week. Indeed, since late January the MPI has remained relatively flat. 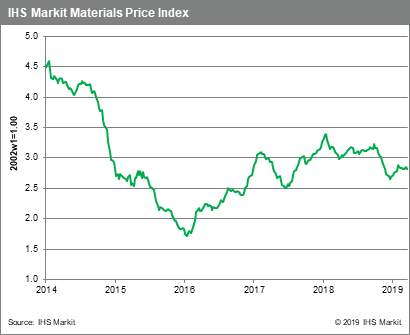 Nine of the MPI's ten components recorded price declines last week. Fiber was the outlier, posting a 1.1% increase. Lumber, rubber, and chemicals were the largest movers, declining 3.7%, 3.5%, and 2.2%, respectively. Weak US housing data in the US reinforced downward pressure on lumber prices, which have fallen by more than 12% since mid-February (though prices remain more than 18% above their December lows). Likewise, rubber prices, which have rallied since December on cuts in exports by major producers, have been hit in the past three weeks by softening car sales in both China and the US. Chemicals prices have been volatile since the start of the year. With higher inventories and flat oil prices, chemicals prices experienced a 2.2% decline last week that matched the 2.3% increase in the prior week. Oil prices, which have trended higher throughout 2019, were little changed last week as increases in Brent and WTI crude were offset by decline in the OPEC basket of crude oil prices. 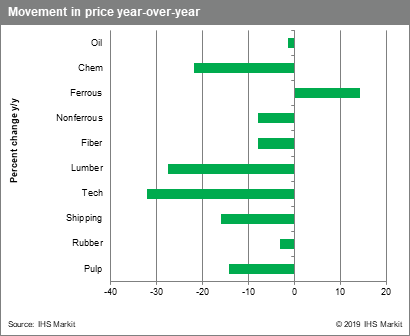 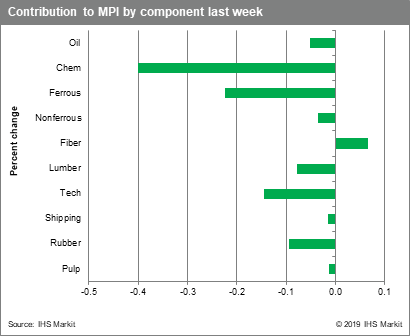 Financial markets generally moved higher through the week even with soft economic data and continued trade policy uncertainty. Politics seems to have played a role in boosting financial markets. Still, the comparative calm in commodity markets over the past two months belies a struggling global manufacturing sector with major policy questions unresolved. A cautionary note is that qualitative measures of political and economic uncertainty are near all-time highs. This clash between sentiment and fundamentals would seem to be a recipe for volatility. We continue to see commodity markets lacking direction over the second half of 2019, much like the past two months. We do not expect a repeat of the kind of broad based retreat seen in the fourth quarter, though downside demand risks appear to be growing. 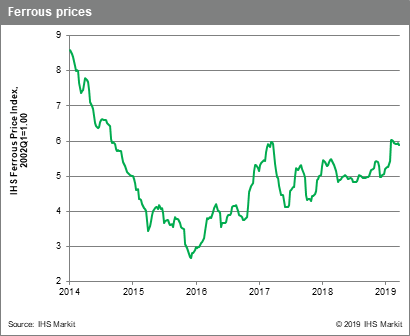 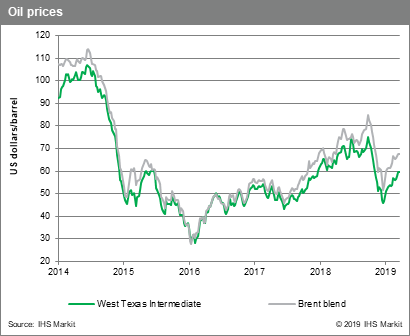 This post was written by Tommy McCartin, a senior economist with the pricing and purchasing service at IHS Markit.