Our Materials Prices index (MPI) edged down 0.1% in a week where six of the index's ten components in fact rose. Heavier weighted components such as chemicals and iron ore displayed weakness after the release of data from China that suggests weaker materials demand in the months immediately ahead. 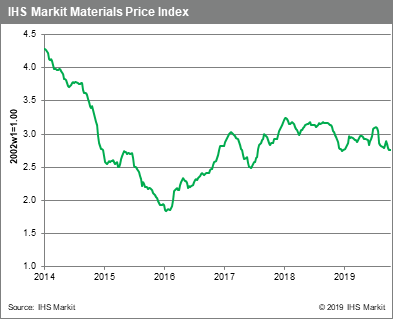 A 3.1% fall in chemicals prices was largely responsible for the slight decline in the MPI last week. Ethylene prices, in particular, saw weakness, falling 5.5% as buyers remained absent from the market. Freight prices fell 3.2%, their fourth consecutive weekly retreat. In contrast to ethylene, however, charter activity does seem to be improving, which promises to at least stabilize charter rates in November. The ferrous sub-index dropped 0.9% last week, on the announcement of significant steel production cuts in the Tangshan area (a city responsible for 11% of Chinese steel output). Lower steel production will cut pig iron output roughly 80,000 Mt/day and thus reduce iron ore demand. Energy prices gained 3.6% for the week, mainly driven by another big jump in Asian and European LNG prices (15.5%, 18.7%) while oil and coal prices edged up 0.6% and 0.9%, respectively. Strengthening winter demand from Japan, Korea and China pressured markets and an issue at Corpus Christi in the US limited exports, which helped to push up prices.

Lower expectations for demand growth have been the overarching theme in commodity markets this year. Chinese GDP data released last week, which showed top-line growth slowing to 6.0% in the third quarter, and the IMF's lower forecast for 2019 global growth, reinforced the pervasive glass is half empty mood in markets. Brexit talks offered a glimmer of hope on Friday that some clarity on one major source of uncertainty hanging over markets might be forthcoming. Parliament's vote over the weekend, however, dashed hope that there might be a resolution to the political crisis in the UK. Looking over the rest of the fourth quarter and into 2020, Brexit, US-China trade talks and the unratified USMCA continue to dominate the outlook.