Last week saw the second major sell-off in global equity markets this year, with the US S&P 500 index dropping 5.3% w/w. The rout was not confined to just equities; commodity prices fell as well, with our Materials Price Index (MPI) falling 2.2% for the week. While rising yields on US treasuries were the trigger for last week's sell-off, underlying the market's reaction to rising interest rates are companion worries about rising trade tensions. 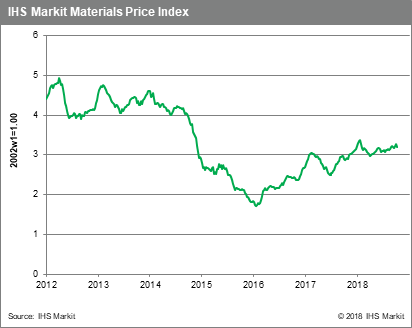 After a strong showing the previous week, oil and chemicals were the principal reason for the contraction in the MPI, falling 2.4% and 5.8% w/w, respectively. This said, the MPI's retreat was broad based, with six of ten sub components declining. Polyethylene prices helped to swing the chemical sub-index radically by contracting -9.8% w/w, erasing most of the previous week's 10.6% jump. This volatility is being driven more by global market tremors than weak fundamentals. Ocean going bulk freight rates also posted a large decline, dropping 4.6%, continuing their now six-week downward march. This retreat, since the start of September, is now more than 21% and highlights better than any single measure the trade related anxiety now affecting markets.

Whilst last week's correction in commodity markets was largely driven by a rise in treasury yields, oil prices and the renminbi (RMB) have also become flash points. Brent crude prices surpassing $80 /bbl will begin to stress oil importing economies, particularly in countries whose currencies have weakened versus the US dollar this year. Finally, the slip of the RMB last week, back towards RMB 7.00, highlights the risk of denting investor confidence in China, which if tripped could see a flight of capital from the country. While contagion effects of exposed vulnerabilities in such countries as Argentina and Turkey have so far been contained, the downside risks to the expansion, and thus materials prices, are growing.