Our Materials Price Index (MPI) rose 0.5% last week, signaling the end of a two-week commodity price retreat. The rally was narrow, with only four sub-indexes increasing. Indeed, the strength in the MPI last week appears to be more of a pause in the commodity price retreat as opposed to the beginning of a new rally - fundamentals remain supportive of our range bound outlook. Oil markets were the main driver behind the rally last week, where prices rose 3.4% on the back of geopolitical developments. 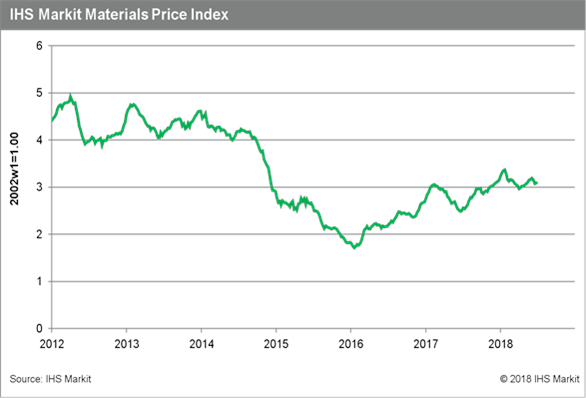 Oil prices have increased at a rapid clip over the past week and a half, set off by OPEC's decision to increase production by 1.0 MMb/d, beginning this month. This increase in production was smaller than markets expected, causing prices to rally by over 6% the day of the announcement. Further geopolitical developments subsequently added more fuel to the rally. A power struggle in Libya has made it unclear if the internationally recognized government or rebel forces will be handling oil exports, while the United States is threatening to sanction all countries that do not eliminate all Iranian oil imports by November 4th. While geopolitics have been the main driver behind the price rally, fundamentals have also been supportive - oil inventories in the US declined by over 10 million barrels last week. As oil prices increase, the cost impact is being felt downstream, as the 3.6% rise in freight rates illustrates.

Despite the temporary bump in commodity prices, global conditions remain indicative of range bound commodity prices. The Chinese Caixin Manufacturing PMI fell slightly from May, coming in at 51.0. The index has now been around this level for four consecutive months, indicating conditions remain weaker than they were at the start of the year. While decelerating growth in China is the cornerstone of our outlook, it appears that growth conditions are peaking across the globe. Industrial production fell in Japan in May, while a revision in the United Kingdom's GDP report last week confirmed that growth slowed in the first quarter. With tighter monetary policy and decelerating global growth ahead, we anticipate further commodity price declines.