Markets failed to buy into the trade war truce between US and China, as post-G20 communiqués differed significantly. These mixed messages helped send commodity prices, as measured by our Materials Price Index (MPI), down 2.7% for the week. Commodity prices have now declined by more than 14% in the fourth quarter, exceeding their first quarter 12.2% correction. Perhaps the only good news from last week was that there was no strong trend in commodity markets; only five of the MPI's ten components posted declines. 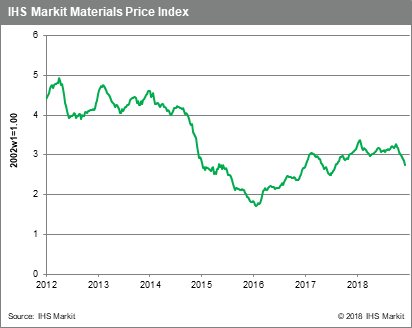 The major mover last week was the Chemicals index, which fell 6.3%, a drop largely attributable as a lagged response to falling oil prices. An $8 per ton drop in iron ore prices helped send the MPI's Ferrous Index down 6.2% w/w; iron ore prices are catching up with the recent collapse in Chinese steel prices. In contrast, oil market showed some stability. Following eight weeks of declines, crude oil prices rose 2.7% w/w after OPEC and Russia agreed to reduce output, relieving concerns around oversupply. The announced production cut was more than expected at 1.2 Mbbl/d and will last for six months.

Macro data continues to point to a challenging outlook for commodities. November's Purchasing Managers surveys for manufacturing were again lacklustre, highlighting the loss in momentum since the start of the year. Chinese commodity imports of steel, copper, iron ore, coal and refined oil products all fell sharply in November, illustrating the slow-down in the Chinese economy. In the US, construction spending grew at 4.9% y/y in November, but fell 0.1% m/m, the fourth decline in five months as housing market demand adjusts to rising interest rates. US unemployment remained static in November at 3.7%, while wage escalation continued to accelerate, all but guaranteeing an interest rate increase later this month. Finally, Brexit continues to spread uncertainty in markets. The parliamentary vote on whether to accept the current proposed Brexit deal, scheduled for Tuesday 11 December, has been delayed on the widely-held expectation that the deal would be rejected.