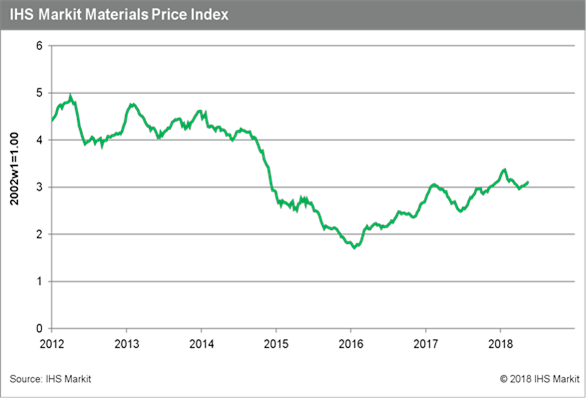 Geopolitical events are threatening oil production in both Venezuela and Iran, pushing up prices. In Venezuela, President Maduro won re-election in a disputed vote, raising the possibility the US will impose stricter sanctions. Further sanctions will only exacerbate collapsing oil production in Venezuela, where we expect that crude production will fall by 320,000 b/d in the second half of 2018. In Iran, fallout from President Trump's withdrawal from the JCPOA is roiling the country's oil sector; last week, French company Total SA announced plans to abandon investments there. In contrast to these negative supply-side developments, oil production is surging in the United States - we expect combined output growth for 2018 and 2019 to equal 2.4 MMb/d. The only check to an even better US response are logistical bottlenecks in the Permian basin. We believe these hindrances to even better US production will be overcome by the fourth quarter this year; until then, oil markets will continue to tighten, providing price support to the commodity complex.

Despite the upward revision to our oil price outlook, we still see headwinds to a sustained commodity price rally. The pace of the global expansion appears to be peaking, with measures of economic "surprises" turning negative as momentum has weakened, especially in Europe. Part of this change can be linked to financial markets, where a slow tightening has helped to increase volatility. An end to ultra-loose monetary conditions potentially exposes many emerging market corporations who have resorted to external dollar borrowing, or countries with financial imbalances, to higher interest rates and currency moves. While this risk to the broader global economy should not be overstated, it should also be noted that for most raw materials, the source of physical consumption growth remains these emerging market economies. Changing conditions in financial markets may therefore blunt what has been a good two-year run for commodities.