Our Materials Price Index (MPI) fell 1.3% last week, breaking a streak of three consecutive gains. The retreat in commodity prices was widespread, with seven of the MPI's ten sub-indexes falling. The MPI is still some 19% higher than in July 2017, but highlighting the change that has come over markets since the end of 2017, commodity prices as measured by our index are down 5% since the end of December. 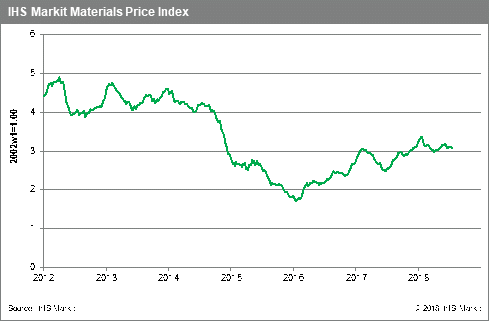 Falling oil prices were a major driver behind last week's MPI decline, falling 4.2%. Lumber prices were also a significant source of weakness, declining 5.5%. A surprise build in US crude inventories pushed oil prices lower. Politics was also a factor behind the drop - the Trump Administration indicated it may consider granting waivers to countries that import Iranian crude, a partial walk back from their position that all countries must stop importing Iranian crude by November 4th. Lumber prices fell as additional supply came into the market. We expect prices to continue falling from May's record levels as the market becomes better supplied in the quarters ahead.

The softness in commodity markets, especially since early June, reflects a growing unease that global growth has peaked at the same time that trade tensions continue to grow. Recent data from China and the Eurozone, both major sources of physical consumption, have not been reassuring. US dollar appreciation has also not helped the commodity complex. The net effect has been to trigger general selling, the only solace at this point being that some markets now appear to be technically oversold. This may limit a sharper decline in the third quarter. The larger conclusion, however, is that rally in commodity prices that began back in January 2016 appears to be over.