Our Materials Price Index (MPI) rose 2.1% last week as commodity markets digested the disruption to Saudi oil production. Another interest rate cut by the US Federal Reserve also helped to both reassure markets and support prices during a volatile week. 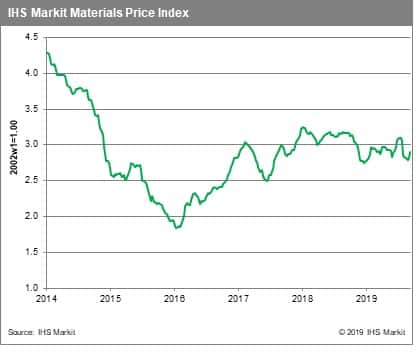 Energy prices rose 6.7% last week following the attack on the Abqaiq facility in Saudi Arabia. Early reports indicated that as much as 60%, or 5.7 MMb/d, of Saudi oil processing capacity had been damaged. Subsequent reports were more encouraging, though IHS Markit estimates around 2.5 MMb/d of capacity will be off-line for more than 90 days. Oil prices increased 6.1% over the week, but gas prices were hit harder, rising 17.2%. Asian gas prices saw the biggest impact, rising 29%, illustrating the region's reliance on Middle-East oil and gas. In contrast, US natural gas prices fell 0.4%. Chemicals prices, given the risk to feedstock costs, also rose on the news of the Saudi attack, increasing 2.8%. Iron ore prices increased 1.2% as Chinese mills restock ahead of the Golden week holiday and on expectations of strong output in October. Falling steel prices in China still present a headwind to any sustained increase in iron ore prices. Moving against the general tide in commodity markets last week, base metals fell 0.7% on news that Chinese officials cut short a visit to the US and comments from President Trump that there is 'no need for a trade deal before the 2020 election'.

While events in the Middle East understandably captured headlines last week, moves by the US Federal Reserve were also consequential and provided an important counterbalance to the shock from oil markets. Following a blow up in repo rates last week, the Fed injected $150bn into the US financial system to alleviate funding pressures in short-term lending markets. As expected, the Fed also cut interest rates by 25 basis points, its second cut of 2019. The language of the press release did not change, with Chairman Powell stating that the central bank would "act as appropriate to sustain the expansion". Together, the Fed actions helped calm markets in a volatile week, and complemented policy actions by raising the likelihood of a further rate cut in 2019 and follow the ECB's example and return to QE to boost liquidity.