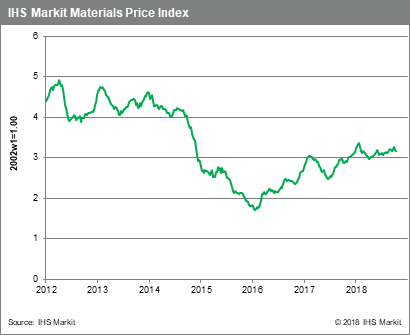 Oil and chemicals prices continued their retreat last week and were the main drivers of the MPI's decline, falling -3.3% and -3.5% respectively. Lumber prices also registered another large decline, falling 3.9%. Prices have dropped more than 50% since their May high due to higher production in the United States and softer demand from housing starts. There are prospects of additional supply in southeast United States with the harvest of downed trees from Hurricane Matthew. Steel making raw materials, which seem to be defying gravity, ticked up 1.5%, their sixth consecutive w/w gain. Iron ore prices have been surging since mid-July in the hope that Chinese stimulus will lift steel production there.

The focus last week in commodity markets was on China's Q3 GDP release, which showed growth at 6.5% y/y, its slowest rate of increase since 2008. This roiled markets upon release, though the Shanghai composite stock index rallied on Friday 2.6%, its strongest one-day rise in two months after Chinese vice-premier Liu He dismissed fears around the escalating trade war, saying "the psychological impact is greater than the actual impact". Alongside these comments, the Peoples Bank of China announced a pledge to guarantee liquidity in the banking system and changes to individual tax laws to support growth. Despite these reassuring words and measures, the yuan seems poised to test the key psychological barrier of 7.00 to the US dollar. Whether it breaches this threshold will be an important test for commodity markets as the year closes.