Our Materials Price Index (MPI) fell 0.9% last week mainly due to an overdue correction in lumber prices. This is the first weekly fall in the MPI since late April, illustrating the strength of the recent move in commodity prices. This continuing strength in the commodity complex can still be seen in the MPIs other nine major components, eight of which rose last week. 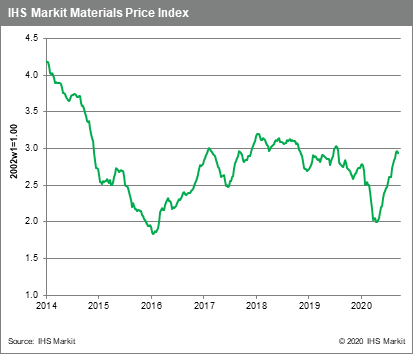 Lumber was the big story of the week as it fell 25.7%, with spot prices dropping from $915 per thousand board feet to $682. Despite concerns around wildfires in the Pacific Northwest, commercial timber acreage remains largely undamaged with loggers now returning. Meanwhile delivery times are shortening and with falling prices in the market, participants are happy to wait on the side-lines. Freight was the only other component of the MPI to decline last week, falling 2.3% on softening of iron ore prices, which dropped back mid-week to $122 /Mt and look set to move lower. Energy prices rallied 3.5% after recent weakness. Coal prices jumped 6.8% as Chinese buyers re-entered the market despite no-change in the import quota policy. The end of the monsoon season also prompted better Indian buying. Oil rose 3.2% last week in part making up the ~10% fall the week before. Brent is sitting around $41.5 /bbl weighed down by the ongoing threat of second rounds of lockdowns in Europe and elsewhere. Rubber prices bounced back by 2.7% on improving European car sales data that showed sales down 17% y/y in August vs. -24% in June and -57% in May.

Equity markets slipped again at the end of last week as the US Federal Reserve disappointed markets by leaving the current QE programme unchanged, not expanding the bond purchase programme as the market expected. On the other hand, the Fed also projected that interest rates in the US were likely to hold steady until at least 2023 and reiterated its commitment to the 2% inflation target with the caveat that it is willing to accept a temporary period of slightly stronger inflation. This is a double-edged sword for commodity prices. The less expansive QE programme tightens liquidity, potentially stymieing growth. But a near zero interest rate, and the potential for higher inflation, suggests a weaker US dollar out to 2023, normally inversely correlated to commodity prices. We maintain that the slow recovery of industrial output and existing overcapacity will weigh on commodity prices in the coming months.