Weekly Pricing Pulse: Lumber and freight markets at the head of the pack as commodity prices decline 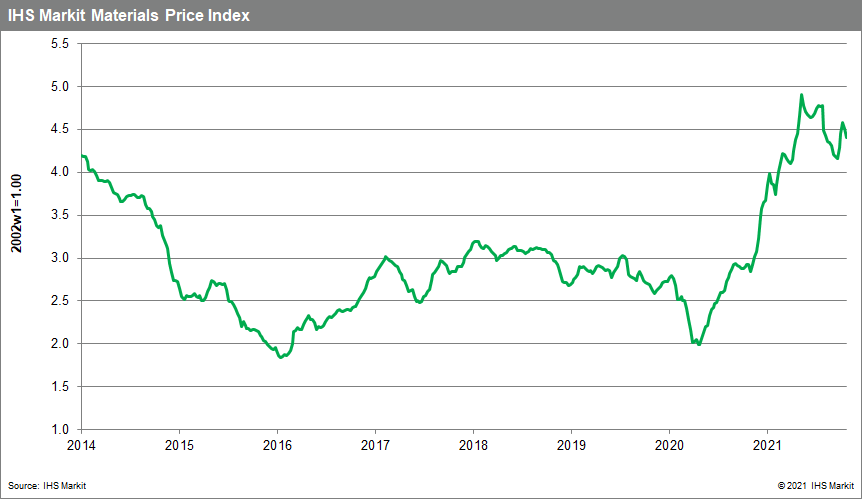 Lumber, freight, and nonferrous metals prices led the retreat last week. United States lumber futures fell 9.8% last week, the subcomponent's largest decline since the beginning of August. Markets reacted to news that US September single-family building permits and overall housing starts slipped 1% m/m and 1.6% m/m, respectively. The freight rate sub-component fell 6.8% last week. The shipping sub-component is a four-week moving average of rates of ships carrying ores from Australia and Brazil to mainland China. Sluggish demand has been putting downward pressure on rates since the first week of October due to the continued impact of production restrictions in mainland China. Pulp prices fell 4.2% last week for the same reason. Nonferrous metals prices fell 5% last week in anticipation of the modification of the Section 232 tariffs between the US and EU. Aluminum prices saw the strongest declines, dropping 9.8%. With the recently announced suspension of the tariffs, steel and aluminum prices will likely see some decline in November.

After recording two weeks of decline, the MPI is now 9.7% below its May peak. While the energy sub-component fell 3.3% last week, price levels remain elevated and supportive of the MPI across the fourth quarter. Continue to watch lumber prices. While the worst may be over for North American lumber prices, markets are likely in store for continued volatility as the number of homes under construction in September are at their highest total since January 1974.