Although the US economy continues to perform well, weak data from Europe and China is creating worry that slowdowns in these regions may have a contagion effect. For commodity markets, the general unease was enough to push our Material Price Index (MPI) down 0.6% for the week. The MPI has now declined for ten consecutive weeks and for 12 of 13 weeks since mid-September. 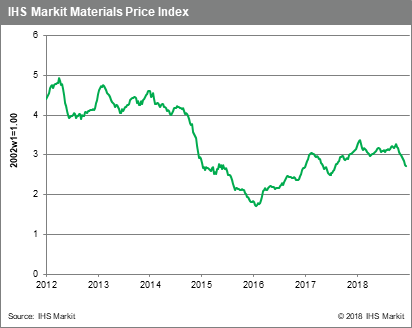 Oil prices retreated 1.3% last week, with Brent settling close to the $60/bbl "floor" that oil producers pointed to in agreeing to cut production during their recent meeting. Chemical prices, which have been sensitive to the drop-in oil prices, fell another 1.7%, their tenth consecutive weekly decline. Since peaking during the first week in October, oil prices as measured in the MPI are down 29% and chemical prices 27%. There were a few pockets of strength in last week's data. Steel making raw materials, as captured in the MPI's Ferrous index, ticked up 0.2% as steel production in China was cut because of environmental mandates and rumors of Chinese stimulus. Freight rates reversed recent losses, as demand for iron ore cargoes re-emerged from the doldrums; charter rates for dry bulk cargoes rose 6.1%.

Global growth concerns hit commodity prices squarely last week as markets considered the strength of key European nations and China. In Europe, all of the big-four economies are facing challenges. Italy is teetering on the edge of recession, Germany is struggling to rebound from a Q3 contraction, anti-government protests in France have contributed to the first contraction in French business activity in almost three years, and the UK is facing political chaos around Brexit. Looking to China, mid-month data releases also paint a downbeat picture. Year over year growth in industrial production has slowed to 5.4% with growth in retail sales down to 8.1%, its slowest rate of increase since May 2003. Some cheer was drawn from fixed asset investment, which grew 5.9% y/y in September, up from 5.3% in August. In contrast, solid retail sales show the US economy still growing robustly. The question for markets is whether the US will soon feel the effects of the slowdown in these other regions. More immediately, do concerns about a contagion effect cause the US Federal Reserve to slow the pace of interest rates hikes in 2019?

n.b. Over the holiday period, the weekly pricing pulse will be published on a slightly delayed schedule.