Our Materials Price Index (MPI) increased 2.7% last week, its third consecutive increase. Prices rose broadly with seven of the ten MPI sub-components climbing last week. Commodity prices have now risen almost 10% in the past three weeks, reversing much of their summer decline, though they are still some 6% below their recent spring peak. 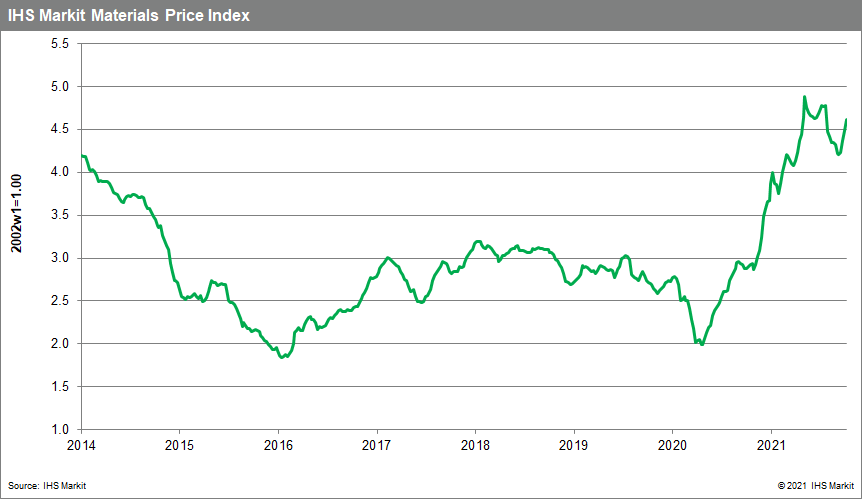 A rebound in industrial metals prices was the main reason for last week's increase. Metals markets are reacting to a combination of factors: higher energy prices, production cuts in mainland China tied to a mandate to reduce electricity use, and fresh bullishness that emerged during LME Week, the industry's first large in person gathering in nearly two years. The result was a wave of precautionary buying and short covering that sent the nonferrous metals index 7.8% higher with the forward curves for all six of the big nonferrous metals traded on the London Metal Exchange moving into backwardation. Copper prices rose 14% while zinc soared to a 14-year high of $3,794 a tonne on the news that major producer Nyrstar, citing high energy costs, will cut production by 50% at its three European smelters. Interestingly, the rise in metal prices occurred even as energy prices eased back from recent highs, although they remain elevated. The energy sub-index fell 1.6% as natural gas prices declined 11.7%, their first weekly decline since early July. This respite is likely to be brief as tight conditions are expected to persist in natural gas markets this winter.

The now three-week rebound in the MPI coincides with other persistent signs of inflation, most notably in the US where September's producer and consumer price index reports showed continuing strength. A more important worry for manufacturers is the disruptions in mainland China's industrial sector tied to mandated cuts in electricity use. While signs of a slowing in China's property and industrial sectors do indicate softening demand for a range of industrial inputs, markets are clearly more concerned about the potential supply-side impacts as seen in higher prices. Continue to watch chemical prices. The chemical sub-index did increase last week after declining in nine of the previous 10 weeks going back to early August. With higher energy prices still pressuring feedstock costs, further price increases seem inevitable, a development that would provide fresh strength to the MPI across the fourth quarter.