Commodity prices enjoyed a broad-based rally last week, rising 1.8% as measured by our Materials Price Index (MPI). Buoyed reciprocal measures of good will on trade issues by China and the US and by aggressive measures to support the Eurozone economy by the European Central Bank, commodity prices collectively rose for the first time since mid-July. 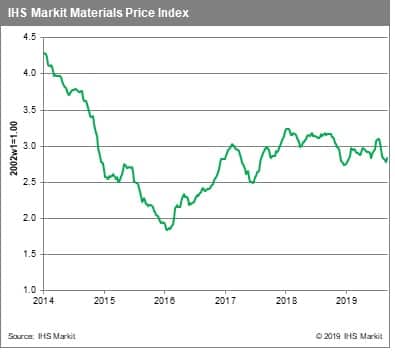 All MPI components, save DRAMS, increased last week. Energy prices rose 3.5% due to a 2.8% rise in oil prices and a huge 11.6% jump in LNG prices. Volatility came from European gas markets, where Gazprom had to cut gas supply, a key Dutch gas field halted production eight years early, while problems with some French nuclear reactors spooked the market. Energy is set for even more volatility following attacks on Saudi oil capacity, which is expected to temporarily cut output of oil and gas by as much as 50%. Prices on Monday rallied on the news closing up ~10%. Chemicals prices were relatively subdued in comparison, rising 0.7%. Base metals rallied 2.5% on the improving trade outlook, as did fiber and rubber prices, which increased 0.8% and 1.5%, respectively. Iron ore prices also rallied, increasing 2.7% to lift the ferrous index 1.2% despite a large 5.8% fall in scrap prices.

The coming weeks will be dominated by developments in Middle East. Historically, the kind of shock now cascading through oil markets can trigger a downturn. This said, the additional policy stimulus being deployed had made the economic backdrop look more supportive for commodities. Sentiment had certainly improved by the end of last week as could be seen in bond markets where yields on sovereign debt improved uniformly. All eyes will now be on the US Federal Reserve and the expected interest rate cut this week. What markets will be focusing on given the disruption in oil markets is language regarding additional rate cuts later this year.