Our Markit Materials Price Index (MPI) declined 1.5% last week, returning the index to negative territory after two consecutive weeks of growth. The commodity sell-off was broad with nine out of ten subcomponents falling, reinforcing the general downward direction in commodity prices over the past three months -- the MPI is now 13.4% lower than its all-time high established back in early March. 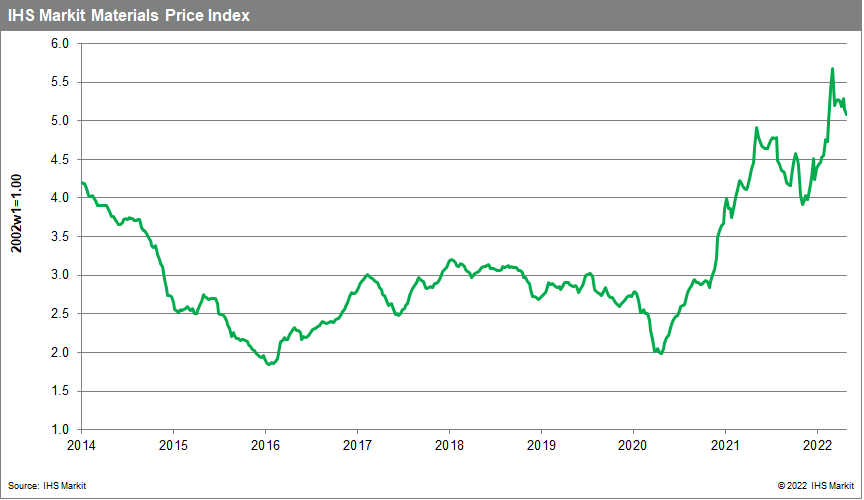 Industrial metals markets experienced a sharp price correction last week, helping to pull the top-line MPI down. The nonferrous metals sub-index declined 5.4% with all six base metals in the sub-index falling. Tin recorded the biggest drop with prices falling to $30,975/tonne, their lowest level since April 2021. Prices were above $50,000/tonne as recently as March. Nickel prices lost 10.2% for the week, dropping to $25,400/tonne, their lowest level since early March when chaotic conditions centered around large short positions forced the LME to temporarily suspend trading. The steel making raw material sub-index also dropped last week, falling 4.5%. Iron ore traded below $136/tonne from $146/tonne the previous week on news that several mainland Chinese producers were reducing output due to eroding profit margins and weaker demand.

It was another tough week on markets with equities experiencing a similar sell-off to commodities. Global equities suffered their worst week since March 2020 with the FTSE All-World Index contracting 5.6%. Interest rises announced by the US Federal Reserve, the Bank of England and the Swiss National Bank turned traders bearish on global economic prospects and sparked the fall. More pointedly, what we are witnessing in equity, bond and commodity markets is an end to twelve years of investment conditions underpinned by accommodative monetary policies. With financial conditions continuing to tighten and growth slowing, expect a correction in commodity prices of as much as 20% between now and the end of 2023.