Commodity prices, as measured by our Materials Price Index (MPI), kept just above water last week, rising 0.2% as oil prices rallied. Seven of the MPI's ten components did fall last week even as sentiment seemed to improve with the opening-up of several economies. The week ended on a sour note, however, with increasingly harsh exchanges between the US and China beginning to unsettle markets. 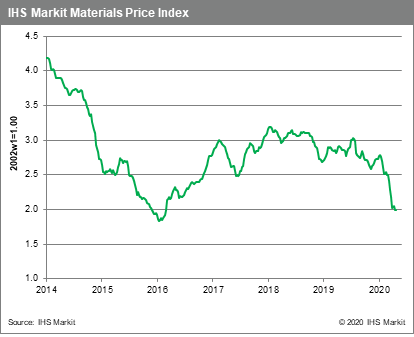 The energy sub-index led the MPI higher, rising 4.2%, mainly due to a 35.2% jump in crude oil, which largely cancelled out the previous week's 37.3% fall. WTI rallied from $3.3 /bbl to $14.9 /bbl on slowing inventory builds in the US and falls in the US rig count. Thermal coal continued its fall, due to weak global electricity generation. Having held up through February, coal prices are now down 25% since late March. Chemicals also rallied, increasing 3.9% on stronger ethylene and propylene prices due to stabilising feedstock costs. Ferrous prices fell 1.3% on stronger iron ore deliveries into China. Even so, ferrous prices are remaining stubbornly high due to weak Q1 shipments. Fiber, lumber, freight, pulp, DRAMs and rubber all recorded small drops because of continuing concerns about demand.

The two big data releases last week confirmed the damage the COVID-19 pandemic has wrought on the global economy. US first quarter GDP declined 4.8% at an annual rate, a foretaste of what is expected to be a record contraction in the second quarter. Likewise, the April IHS Markit Purchasing Manager Index (PMI) reports chronicled sharp downturns in every economy surveyed. Even in China, where the economy has largely reopened, continuing weakness in forward looking indicators such as new orders highlights what is likely to be a prolonged recovery now that the worst of the pandemic has passed. But perhaps most disturbing for markets is the deteriorating relations between the US and China, which is now threatening to undo the positive trade developments of last December and January. Whether the rhetorical exchanges are mere posturing or a resumption in the trade war is difficult to say, but commodity markets are clearly nervous, preferring to deal with just one fight at a time.

Posted 06 May 2020 by Mr. William May, Senior Economist Pricing and Purchasing, IHS Markit