Our Materials Price Index (MPI) fell 1.6% last week, a welcome change from the strong increases in the previous three weeks. Price declines were mixed with six of the ten MPI sub-components dropping. Despite last week's drop, commodity prices are still 7.9% higher than a month ago. 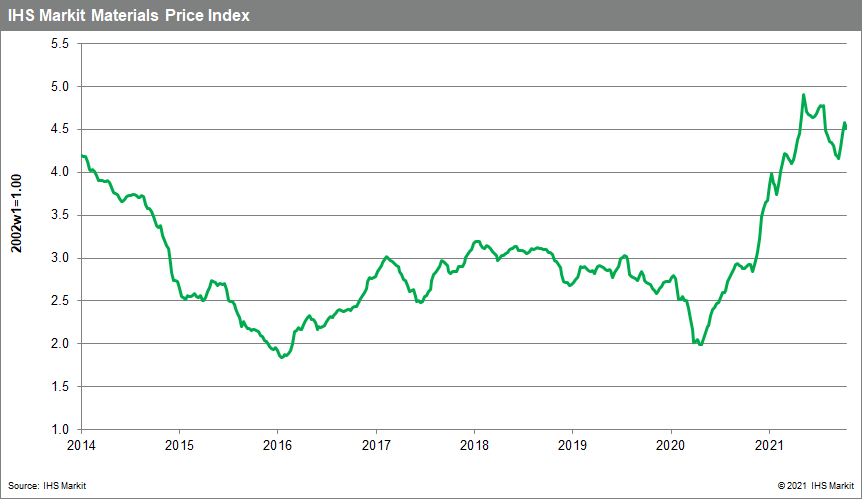 A continued retreat in energy prices was the main reason for last week's decrease. Asian coal prices plunged, dropping 13.5%, the second biggest drop ever recorded, as markets took fright over the prospect of further state intervention. Mainland China has seen coal production fall in recent months because of campaigns to improve mine safety and address pollution levels in the country. This has created a shortage, pushed up prices, leading to cuts in electricity production because of the inability of power companies to pass along cost increases. Induced power rationing and mandated cuts in production for many heavy industries has prompted the National Development and Reform Commission to intervene. This has caused coal prices to plummet on the expectation coal supply will now increase relatively quickly. Production restrictions in mainland China are having a broad impact on commodity markets. Pulp prices, for example, dropped 11.2% as lower industrial production reduced the need for packaging, sending the benchmark Northern Bleached Softwood Kraft (NBSK) price down $100 per tonne last week. In contrast, metals markets remained bullish with our nonferrous index increasing 2.8%. For base metals, supply-side effects dominate, with conditions looking tighter because of smelter production cuts in China. Copper prices rose 4% as strong buying and an engineered short squeeze led to 'disorderly' trading, forcing the LME to intervene to maintain liquidity in its contract.

Last week's decline in the MPI highlights the uncertainty markets now face because of policy interventions in mainland China. Restrictions do look likely to be relaxed in several markets before the end of the year. However, in others, what have become normal winter season cuts could be extended well into the first quarter because of the upcoming Olympics in Beijing, a major steel producing region. Along with strong oil and natural gas prices the combination could provide fresh strength to the MPI across the fourth quarter.