Commodity prices, as measured by our Materials Price Index (MPI), fell 1.0% last week in a broad-based move that saw eight of the index's ten sub-components decline. Weak buying during the usual Lunar New Year holiday lull is now being matched against active selling tied to growing fears about the impact of the coronavirus on Chinese demand. 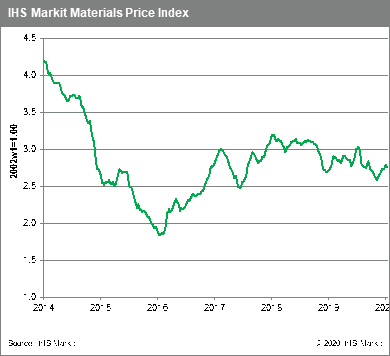 Freight rates and rubber saw the largest declines last week, dropping 4.9% and 3.8%, respectively. Rubber prices have been rising almost without pause since early October on concerns about tightening supplies related to a fugal blight, so some profit taking might be expected. Bulk freight rates have dropped by more than 20% since late December on weaker iron ore shipments from Brazil and Australia as a result of wet weather, especially so in Southern Brazil. Although Hubei province (Wuhan is the capital) is a modest steel making center by Chinese standards, prospects of extended holiday idling - and the possibly that other areas will soon face similar actions - are undercutting charter rates. Other commodities with exposure to China have shown weakness as well. Pulp, metals, natural and synthetic fibers, and chemicals all saw modest declines last week after showing upward momentum since early December. In particular, copper prices, often regarded as a bellwether for the global economy, have fallen almost 9% in two weeks, giving up almost all of their fourth quarter advance. Lumber and DRAM prices were the only sub-categories in the MPI to buck the downward trend last week, rising 2.8% and 0.9%, respectively. Lumber prices have been reacting to very good seasonal housing activity in the U.S. linked to lower mortgage rates, while DRAM prices are rebounding because of improving semiconductor orders and shipments.

While reports of the spreading coronavirus in China dominated commodity markets last week, other news was more encouraging. Our flash January Purchasing Manager reports for Japan, the Eurozone and the US all showed conditions either stable or improving, giving hope that the upward momentum in markets evident during the past two months might be restored once the flu epidemic in China is contained.