Our Materials Price Index (MPI) fell 3.5% last week, with seven of the ten sub-components declining. Markets are growing increasingly anxious about global growth, particularly in mainland China, and continued aggressive monetary tightening in western economies. This sparked the second weekly decline in the MPI and leaves the index at its lowest level all year. 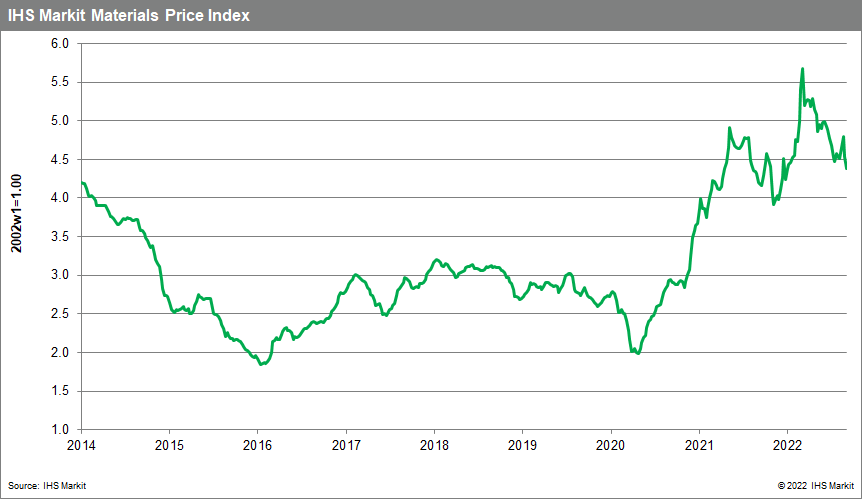 The commodity market sell off continued last week with only chemicals and pulp recording price increases. Volatile natural gas prices in Europe and Asia have been a feature of commodity markets in the past year and last week was no exception. The MPI's energy sub-index declined 7% as Asian spot landed prices of liquefied natural gas (LNG) fell to $40/MMBtu, down $11 for the week following a $21 drop the previous week. European prices also dipped to $55/MMBtu, a 14% drop. Prices were reacting to progress in the European Union efforts to intervene to reduce electricity prices and that natural gas storage levels in the bloc have already reached 83% against an 80% October target. Oil prices also dropped last week on global growth fears despite an announcement by OPEC+ that it was reducing supply. OPEC+ agreed only to an insignificant downward supply tweak that will take away in October the 100,000 b/d it nominally added in September. However, the weaker demand environment was of more concern to traders and sent prices of Brent Crude, the international benchmark, below $90/barrel for the first time since January.

Prospects for slower demand continue to weigh on commodity prices, with central bank action last week further harming market sentiment. The European Central Bank (ECB) raised interest rates by 75 basis points reflecting acute concerns over persistent upward surprises on inflation, broad-based current pressures, and a potential upward shift in inflation expectations. The Bank of Canada also raised its policy rate 75 basis points last week in the face of still-high inflation, with core inflation rising. A strong US Dollar was another factor in last week's price slide across commodity markets. Although supply-side risks in energy markets and low inventory in some metals have the potential to trigger prices increases later this year, commodity prices have peaked. Even more encouraging, this change upstream in supply chains is migrating downstream into intermediate material and component prices and foretells a slowdown in goods price inflation into 2023. How quickly this change in goods price inflation translates into lower consumer price inflation remains an open question, however.