As measured by our Materials Price Index (MPI), commodity prices rose 2.0% last week. An improvement in sentiment, a refinery accident in the US and Middle East tensions all combined to lift prices strongly for the second consecutive week. 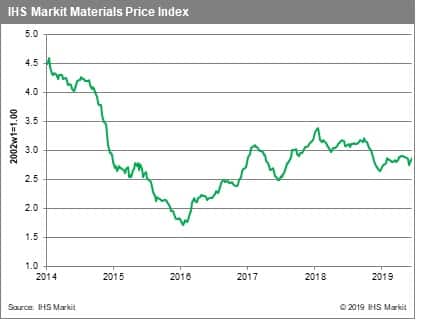 Tensions in the Middle East remained high last week, with oil prices rising 1.8%. Chemical prices also showed strength, rising 5.3%, in part because of a fire that hit the largest refinery on the US east coast. Among chemicals, benzene was the biggest mover, with prices jumping 13.9%. Iron ore prices continued their march higher, rising 2.4% after Rio Tinto lowered production guidance for 2019. Benchmark prices are now at $116 /t compared to less than $75/t at the start of the year. Lumber prices, which have been rising strongly because of mill closures, rose another 11.4% last week and are up 28% in the last three weeks.

Even with military action in the Persian Gulf narrowly avoided, the mood in markets became more upbeat as the week progressed. The announcement that President Trump and Chairman Xi Jinping are formally scheduled to meet during the G-20 talks in Osaka late this month is giving hope that the US-China trade negotiations will at least not become worse. Markets were also reassured by Federal Reserve Chairman Powell's dovish comments following this month's FOMC meeting and are now fully expecting a rate cut before year-end. Given the current state of global manufacturing activity, commodity markets still look vulnerable, setting up potential volatility should hopes for the G-20 summit not be fulfilled.

The tide appears to be turning in commodity markets with more signs that the year-long rally has run its course. In… https://t.co/uSoJ5bkxOE