Commodity prices, as measured by our Materials Price Index (MPI), rose 1.6% last week, in response to several pieces of positive news on trade. Most important was a "phase-one" agreement reached between the US and China that promises to at least partially roll-back tariffs. But other good news included agreement on the new US-Mexico-Canada trade pact and clarity on Brexit following Prime Minister Johnson's election victory - even though a quick UK exit from the European Union is now certain. 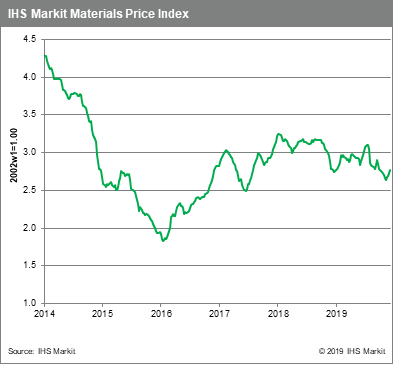 Ferrous metal prices were once again a large contributor to the MPI's increase, rising 4.0%, with iron ore prices breaking back above $90 per ton for the first time in seven weeks. Ocean going charter rates also saw a relative large weekly gain, increasing 4.4%. Reduced capsize capacity and increased demand for iron ore has helped lift charter rates nearly 10% since they stabilized in late November. Rubber continued its recent rally climbing another 3.3% on falling inventory as buyers scramble to acquire stock in the face of a fungal disease that threatens to damage rubber trees in South Asia. Non-ferrous metals prices enjoyed the trade-deal optimism, rallying 1.2% driven by a large 4.0% jump in copper prices and the first rise in nickel prices in six weeks. Chemical and energy prices were again weak sub-categories in the MPI. The MPI's chemical index fell 1.0% on another double-digit drop in US ethylene prices, while the energy sub-index retreated 0.6% due to declines in US and European natural gas prices. Oil rose 2.6% because of announced OPEC and Russian production cuts, though crude price increases were not enough to offset the weakness in natural gas.

Since hitting a 2019 low in mid-November, the MPI has risen by nearly five percent. While it is difficult to say if November represented a definitive turning point for commodities, the mood in markets has certainly improved. Positive trade developments and data showing manufacturing activity stabilizing are cause for at least guarded optimism about the near-future. This good news is tempered, however, by our outlook for 2020. The rebound forecasted in industrial production is not particularly strong, while the US dollar will continue to show strength, a combination that argues against a sustained rally in commodity prices.

Colombia sold its largest debt package to date and Republic of Georgia the cheapest bond from its region.… https://t.co/m9E6jCfmDz

The six-day grounding of the Ever Given highlighted the fragility of global supply chains. The grounding may have b… https://t.co/edon1lj6fM