Our Materials Price Index (MPI) climbed a comparatively modest 0.5% last week, following a 0.7% increase the week before. Price increases were mixed with only half of the MPI's ten sub-components rising. After last week's increase, commodity prices are once again near their all-time high established in early March. 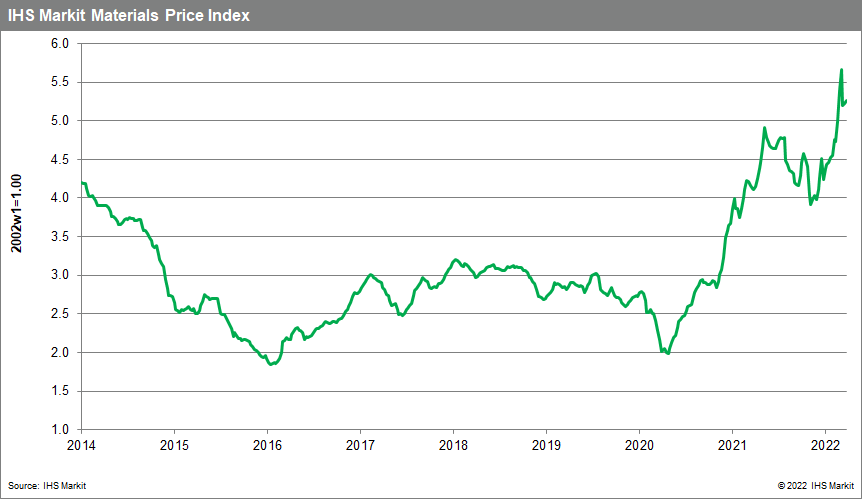 Further volatility in natural gas markets was the main reason for the overall increase in the MPI last week. The energy sub-component increased 2.9% as natural gas prices spiked once again. UK spot landed prices of liquefied natural gas (LNG) reached $40/MMBtu, up from $32 the previous week. Asian prices also soared, reaching $37/MMBtu, up $3.60 in one week. US Henry Hub prices experienced a similar increase meaning global natural gas prices jumped over 20% last week. The main reason for the price move was the prospect of a sharp reduction in supply emanating from a payment dispute between European countries and Russia. Despite widespread sanctions on Russia since its invasion of Ukraine, flows of natural gas to Europe have been generally maintained. However, Russia recently insisted on payment in roubles from "unfriendly" buyers, prompting Germany and Austria, two of the biggest consumers of Russian natural gas, to begin the process of legislating for domestic use restrictions. The prospect of reduced supply sparked the latest round of frenzied trading, creating further upward pressure on natural gas prices. The latest turmoil in natural gas markets contrasted with oil trading -- prices declined 7.2% last week after the US announced the release of 180 million barrels of crude oil from its strategic reserves in the next six months.

Recent strength in the MPI underscores the pressures present in commodity markets and, in turn, the difficulties facing policymakers. Consumer inflation is already rising strongly in many economies. In the USA, the price deflator for personal consumption expenditures (PCE), increased 0.6% in February, and is now up 6.4% over the last 12 months. Excluding food and energy, the core PCE price index rose 0.4% in February and 5.4% over 12 months. Although the current jump in commodity price reflects the sudden withdrawal of Russian supply and will last only as long as it takes markets to adjust, they do add to an already strong inflation environment. The risk for policymakers is that this latest round of commodity price increases, by adding to inflation, begins to affect inflation expectations, making the job of taming inflation all the harder.