Our Materials Price Index (MPI) fell 0.2% last week, with seven of the index's ten sub-components declining. Following the extreme volatility in commodity markets in the immediate aftermath of Russia's invasion of Ukraine, prices have been more settled in the last four weeks. Still, commodity prices remain near their all-time high established in early March. 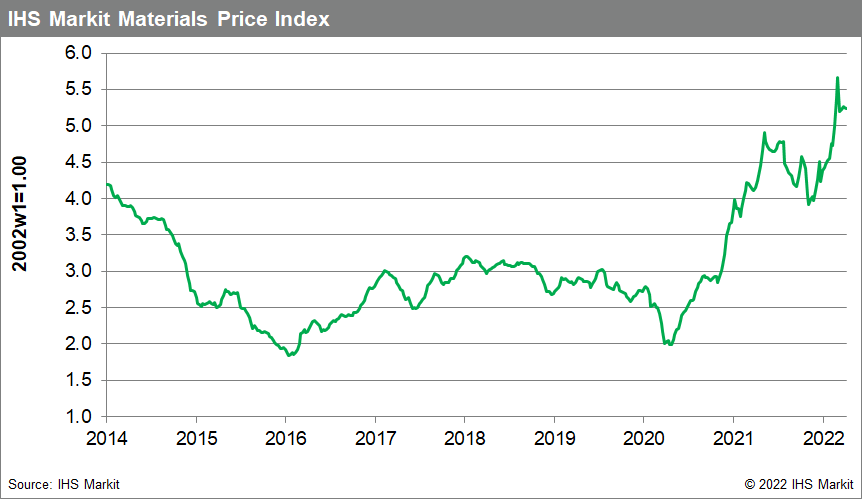 Shipping prices fell 3.1% last week. This marks the second consecutive week of decline for the freight rate sub-component and its largest contraction in two months. The shipping sub-component is a four-week moving average of rates of ships carrying ores from Australia and Brazil to mainland China. Rates along the Australia-mainland China route have been falling since the beginning of March while those along the South America-mainland China route had been stable until last week. COVID-19 lockdowns in mainland China have dampened the country's consumption of raw materials. There is, however, some upward pressure in the near term as mills in China seek to increase steel production as lockdowns ease. Energy prices rose 3.7% last week, reversing some of their declines the week before. The energy sub-component rose because of higher coal prices in Europe, which jumped 17.2% following the European Union's proposal to ban Russian coal and prevent Russian ships from entering EU ports.

Last week's relative calm in commodity markets was overshadowed by fresh data showing global consumer and producer price inflation continuing to rise. The United States Consumer Price Index (CPI) ended March up 8.5% year-on-year, easily the fastest rate of increase since the early 1980's. In Europe, Germany and the United Kingdom saw their CPIs rise 7.3% and 7.0%, respectively, in March relative to the same time last year. Higher year-on-year inflation can also be seen in the March releases of the US, UK, and Japanese producer price indices (PPIs). Logistic disruptions in supply chains do not seem close to resolution despite initially optimistic signs such as improving delivery times. Vital in-land freight transportation recovery will be pushed back as the Russian invasion of Ukraine delays necessary equipment manufacturing and the surge of COVID-19 cases in mainland China lifts order backlogs across various trade lanes. The bottom line is that cost pressures remain strong, presenting policymakers with a real challenge in trying to lower inflation.