Our Materials Price Index (MPI) jumped 5.4% last week, its fifth largest weekly increase on record. Price increases were broad with eight out of ten sub-components in the index rising. After last week's increase, commodity prices have now surpassed their recent May 2021 peak and now sit only 2.2% below the all-time high recorded set in April 2011. 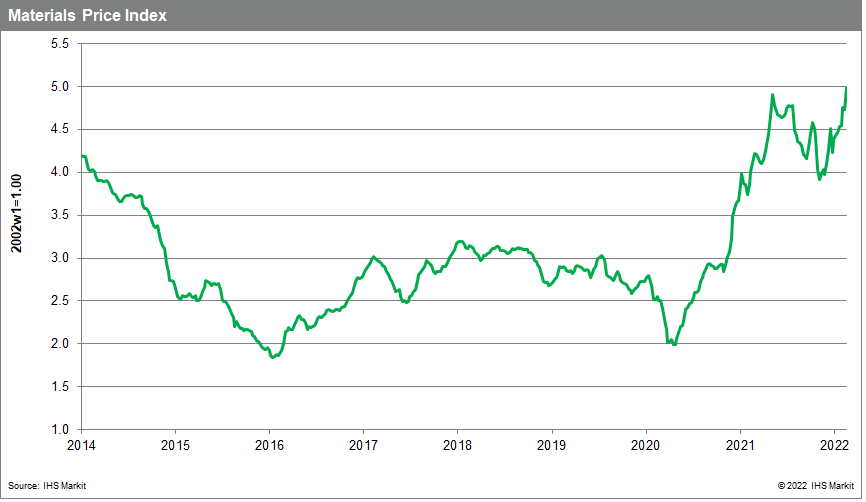 Energy prices were the main contributor to the MPI's increase last week. Our energy sub-index soared 25.6%, the largest single increase since we formed the index in 1993. Coal, oil, and natural gas prices all jumped but it was the latter that recorded eye-watering price hikes. UK spot landed prices of liquefied natural gas (LNG) reached $43/MMBtu, up from $23 the previous week. Asian prices also soared, reaching $37/MMBtu, a 44% gain for the week. Prices were already volatile because of low European inventory and high seasonal demand, but the Russian invasion of Ukraine sparked panic buying in the market. The European Union relied on Russia for some 40% of its natural gas supply in 2020 so the prospect of reduced flows sent prices skyrocketing. Flows do not appear to have been impacted so far, but significant price volatility is expected in the near term while the crisis continues. Oil markets also felt the effects with Brent crude breaching $100/barrel for the first time since 2014. A geopolitical risk premium will continue to be attached to oil prices until additional supply arrives or fighting in Ukraine ends.

With inflation already high, the jump in energy prices last week only adds additional upward pressure on global prices while at the same time lowering projected growth - an unwelcome combination. Thus far there have been minimal supply disruptions from the conflict in Ukraine, though the risk remains elevated with real upside potential for prices. Supply chains are set to tighten with the disruptions and bottlenecks that have plagued markets for two years and are now likely to continue into the second half of the year at least. However, as prices soar, the likelihood of demand destruction rises. Still, expect the MPI to record its highest ever level in the coming weeks.