Our Materials Price Index (MPI) fell 2.9% last week, a further decline after the previous week's near record price drop. Declines were again widespread with all ten MPI sub-components falling for the second week in a row. While aggregate inflation measures continue to draw justifiable attention, commodity markets have been signaling a change upstream in supply chains since May. The correction has been modest to date, but if it persists (which IHS Markit believes it will, this change points to cost pressures in goods markets ebbing as early as the first half of 2022. 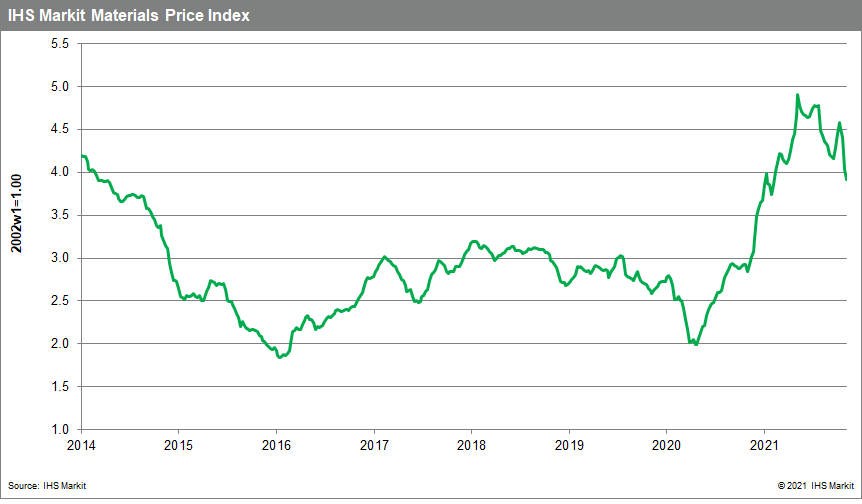 Declines in energy, steel and freight prices were most notable last week. Global natural gas prices continued to retreat from record highs and dropped 7.6%, their fifth consecutive weekly decline. European prices, which had seen the greatest increases recently, dropped 9% last week after data showed that Russian gas imports to Europe were increasing. Given that storage levels in Europe are at ten-year lows this supply boost was well received and brought price relief to the market. Power rationing and mandated cuts in production for many heavy industries as part of China's 'Dual Control' policy continued to create problems in steel markets. Steel production in mainland China has dropped by more than 20% in recent months, triggering a plunge in iron ore prices. Prices fell to $92 a tonne last week, an 18-month low, having been as high as $220 a tonne in May. Lower iron ore prices have translated into lower shipping costs with prices for transporting ores from Australia and Brazil to mainland China down 12.7% last week.

The now six-month correction in the MPI contrasts with rising consumer price inflation in every economy. US inflation, as measured by the Consumer Price Index, reached 6.2% year over year in October, its highest rate in three decades. Other advanced economies and many emerging markets are seeing top-line consumer price inflation rise as well, prompting debate about how transitory this bout of rising prices will be. To be sure, cost pressures in goods markets remain acute. Commodity prices, however, look increasingly like they hit their high-water mark in the current price cycle some months ago. Moreover, the correction in commodities shows signs that it will continue into 2022, which if true, will soon begin to alleviate pressure on at least goods prices.