Our Materials Price Index (MPI) rose 2.3% last week, its first increase since early June. The recovery in prices was narrow with only three out of the ten subcomponents increasing. Even though the MPI pushed higher last week, it is still 19.4% below its all-time high established in early March and 4.3% lower than this time last year. 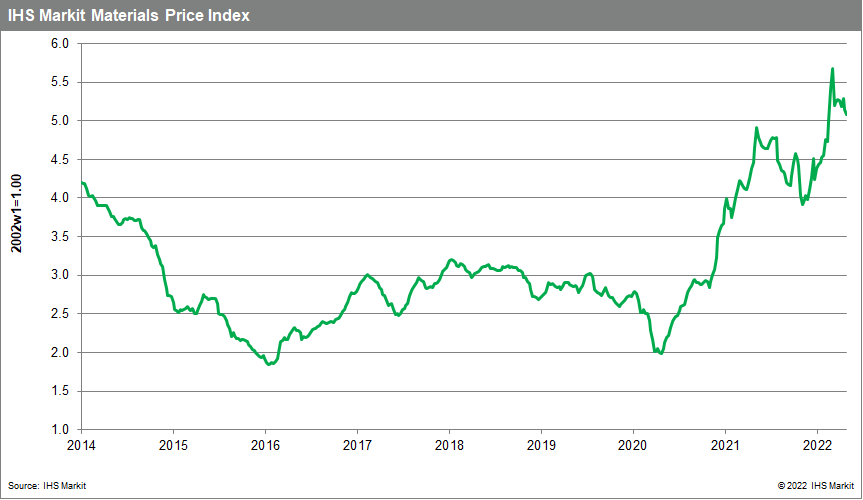 A rise in energy prices pushed the overall MPI higher. Non-energy prices were in fact down by 2.2% last week. However, natural gas and coal both increased significantly, with the energy sub-index climbing 12%, its biggest weekly increase since late February in the immediate aftermath of Russia's invasion of Ukraine. UK spot landed prices of liquefied natural gas (LNG) reached $44/MMBtu, up $29 for the week. US prices also increased with Henry Hub reaching $8.60/MMBtu, a 10% gain. Prices were reacting Russia's announcement that it would reduce gas flows through its Nord Stream 1 pipeline, the major source of its exports to Europe, to 20 per cent of its capacity. This has raised fears of widespread shortages in Europe this winter. The potential reduction of gas supply heightened interest in alternative energy sources and sent Australian thermal coal up $14 to $426 per metric ton, its highest ever price. Overall, global coal prices climbed 4.9% last week. Industrial metals also rebounded with the nonferrous metal sub-index up 2.5%. Copper prices rose to $7,800 per tonne, having been as low as $7,200 per tonne the previous week. Base metal prices reacted to a slightly weaker US Dollar, the promise of additional infrastructure spending by mainland China, and a continuing decline in inventory.

Weaker demand expectations are still weighing on commodity prices but last week's rise in the MPI suggests that markets are turning less bearish about the future. Even though US real GDP contracted in the second quarter, according to the Bureau of Economic Analysis "advance" estimates, traders viewed this as a positive sign for inflation. With demand slowing, markets are now expecting inflation to ease and interest rates to decline in 2023. Weaker demand will remain the key influence on commodity prices in the near term but easing goods inflation will limit the downside. Our caution in the sanguine view of goods price inflation is that spare capacity in energy markets and inventory in metal markets remains low, exposing both to a potential rebound in prices should there be any loss in supply or better than expected demand.

Investors responded to the UK government's tax-cut announcement by pummeling the pound and the U.K. bond market. W… https://t.co/hbn5GGLmbi