Our Materials Price Index (MPI) increased 1.3% last week, building on a nearly 1.0% increase in the previous week. Price movement was mixed with three of the ten MPI sub-components down last week. Commodity prices as measured by the MPI are up 88% compared to the same week in 2020, though the MPI is about 3% below its recent peak in early May. 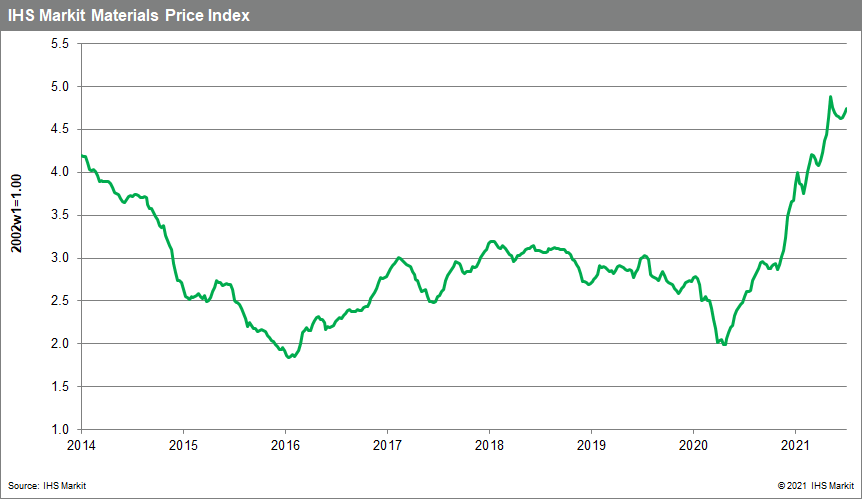 The largest gains in the MPI were seen in freight and chemicals prices. Freight prices increased 3% last week, their fourth-consecutive rise, though ocean-going charter rates remain significantly below their peak mid-May levels. Global logistics services remain in a state of near turmoil and continue to be one of the principal reasons for the strength in goods price inflation. The MPI's chemicals sub-component, however, was the larger driver pushing the overall index higher last week, posting a 3.6% gain. This increase followed an increase of almost the same magnitude in the previous week. Global ethylene prices have been the main reason for the recent strength in chemicals prices, recording an average increase of 9.4% across regions last week. The unusually large increase points back to the recent run-up in oil prices. In the US, where ethylene price increases were strongest, recent unplanned outages have also left inventory tight and contributed to the large weekly movement. On the downward side, rubber prices posted a 4.2% decline last week, extending the run of recent price reductions to six weeks. The pullback in production by Chinese tire manufacturers continues to impact rubber demand.

Last week was upbeat for financial markets, with the S&P 500 equity index closing at a record high on Friday. The release of the Global PMI data last week indicated continued economic expansion in June, though the data suggest economic activity in emerging markets is lagging developed economies. With many large exporting nations seeing rising COVID-19 infections, supply delays have worsened. The global manufacturing PMI for delivery times increased in June to its highest level since the onset of the pandemic. This week will feature updates on broader inflation indicators for the US, the UK, and the eurozone. While we expect commodity prices, as measured by the MPI, to decline over the rest of the year, the data releases this week will shed some light on how recent movements in commodity markets are impacting prices downstream.