Albeit with a slight lag, commodity prices have risen in response to the recent improvement in manufacturing industry sentiment. Although not yet a definitive trend, our Materials Price Index (MPI) rose 0.8% last week, its second consecutive gain. Seven of the MPI's ten subcomponents increased, marking a broader upward move than was seen the week before. 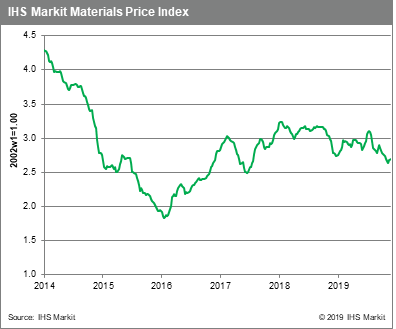 Chemicals prices, down 4.9% so far in Q4, moved 1.1% higher last week, principally on an 11.1% spike in European Benzene prices tied to production issues at two suppliers. Ethylene prices rose 1.6% on restocking in China, though strong supply ensured propylene prices fell 0.9%, their tenth straight weekly fall. Ferrous prices lifted 1.1% as both steel scrap and iron ore prices rose on firming finished steel prices in China. Freight prices rallied 1.4%, mainly due to stronger capesize rates for the Brazil-China iron ore route. There was little change in Australia-China charter rates, however, even with the improved outlook for the steel industry in China. Energy prices fell 0.1% last week, due to declines in coal and gas prices. Rubber prices rose 0.9% and are up 11.4% gain in seven weeks. Supply in South-East Asia is currently tight despite weakness of automotive demand because of concerns over the potential impact of a tree fungus in Thailand future production.

The second weekly rise in the MPI following eight weeks of decline hardly constitutes a rally, though various measures are hinting at a change in sentiment: bonds yields have risen almost uniformly globally, likewise equity prices are up globally over the past two months, and short positions being trimmed for several industrial metals. While IHS Markit's forecasts do not suggest a major cyclical change in the risk climate of the kind that would support a sustained rally in commodities prices, recent data are suggesting that we may be at an inflection point for global manufacturing activity. It will therefore be interesting to see how commodity market's react to November's Purchasing Managers Index data, which would seem to confirm that conditions are at least stabilizing in manufacturing.