Our Materials Price Index (MPI) fell 2.7% last week, its biggest decline since early February. This is the second week in a row the MPI has declined, marking a turnaround from the nine-week long rally that faltered last week. The retreat was broadly based, with nine of ten sub-indexes falling. Chemical prices were the main driver behind the decline, falling 6.3%. Lumber and rubber prices also showed weakness last week, both pulling back 5.4%. 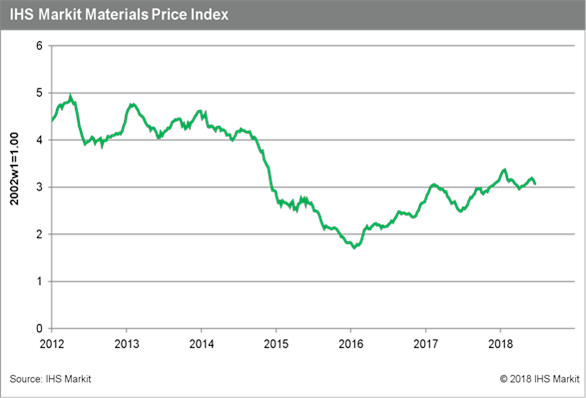 The strength chemical markets saw earlier this month continued to dissipate last week. Ethylene prices plunged, dropping 12.4% for the week, making for a combined two-week fall of over 20%. Market sentiment remains bearish as steam cracker capacity is ramping up, raising fears of oversupply. Propylene prices also fell on worries about higher production with demand staring to look softer. The strength propylene prices saw earlier this month destroyed demand as consumers waited on the sidelines. Demand should improve as prices come down. Meanwhile, lumber prices experienced their largest weekly decline since January of 2016 for the second week in a row as supply continues to improve.

While the global expansion remains intact, a sense of nervousness is creeping into markets as the outlook becomes cloudier. A brewing trade war is the biggest risk facing markets now, evidenced in part by the decline in equities and commodities last Tuesday and Wednesday as trade rhetoric between the US and China heated up. Flash PMI reports once again pointed to peaking global growth, adding to the uncertainty ahead. The Eurozone composite number was the second weakest in seventeen months, while the United States showed a slowdown in factory activity - a slowdown driven in part by recently imposed tariff actions. As anxiety builds in markets and global growth continues to decelerate - particularly from raw material consuming economies - look for more commodity price declines ahead.