Our Materials Price Index (MPI) rose 1.7% last week, bringing an end to four straight weeks of declines. Price increases were limited, however, with only three of the ten MPI sub-components rising. Despite last week's rise, commodity prices have dropped almost 13% since mid-October, a change that points to cost pressures in goods markets ebbing as early as the first half of 2022. 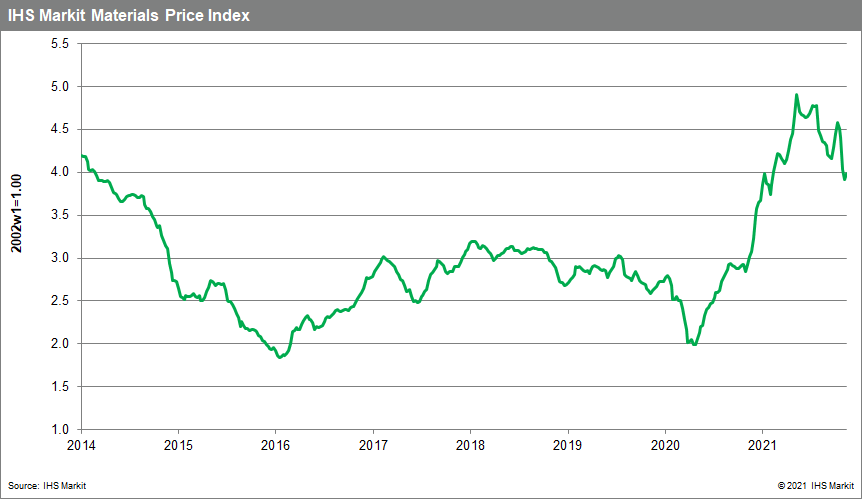 Soaring natural gas prices drove the MPI higher last week. Global natural gas prices increased 26.2% with European and Asian markets posting large gains. The US market is more isolated, so price movement remains limited at least for now. UK spot landed prices of liquefied natural gas (LNG) climbed to $32/MMBtu, up from $25 the previous week, while the Japanese spot landed price for LNG reached $37/MMBtu, up from $28 the week before. Inventory levels in Europe and Asia are depleted and exports from Russia remain low by historic standards, which increased nervousness among traders and pushed prices higher. The situation was exacerbated when Germany suspended the certification of the Nord Stream 2 pipeline, designed to transport natural gas from Russia to mainland Europe. This latest delay ended any chance of additional supply from the pipeline this winter and suggests elevated prices could last through much of the near term. Prices for lumber also shifted higher last week with our sub-index recording its largest-ever weekly gain, climbing 25%. A supply-side shock was the major reason for the jump as storms and mudslides in British Columbia (which provides 14% of total US lumber) blocked deliveries and prevented US construction firms from replenishing inventory. Despite last week's increase, lumber prices remain 50% lower than the recent peak in May 2021.

Last week's increase in the MPI chimes with continued market nervousness over rising consumer price inflation in many economies. US inflation, as measured by the Consumer Price Index, reached 6.2% year over year in October, its highest rate in three decades, prompting the Vice-chair of the Federal Reserve, Richard Clarida, to suggest it could act sooner than expected to combat inflation. To be sure, cost pressures in goods markets remain acute. Commodity prices, however, look increasingly like they hit their high-water mark in May. Volatility will certainly continue in global gas markets over the winter, but the broad correction in commodities shows signs that it will continue into 2022, which if true, will soon begin to alleviate pressure on at least goods prices.