Our Materials Price Index (MPI) increased 0.9% last week, breaking a string of six consecutive weekly declines. The increases were broad with eight of the ten MPI sub-components up last week. Commodity prices as measured by the MPI are up 90% compared to the same week in 2020, though since early May the index has declined 4.3%. 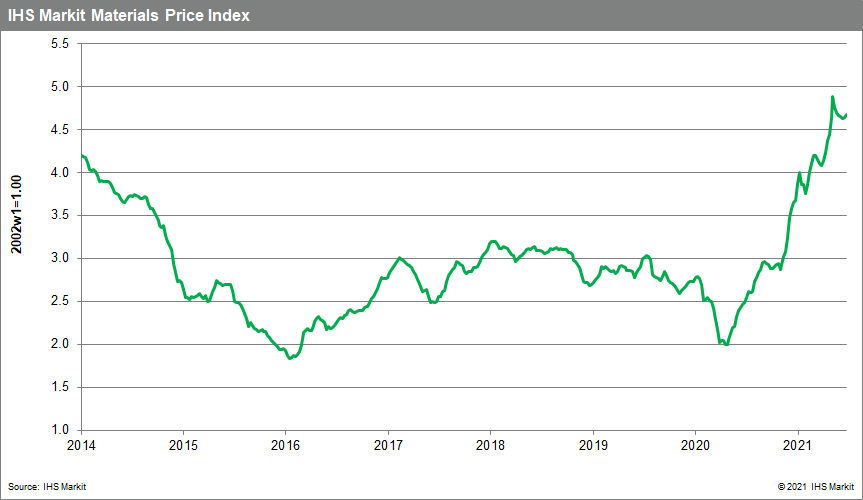 Energy and chemicals saw the biggest increases last week. Our energy index was up 3.9% as crude oil prices edged towards $76 a barrel for the first time since 2018. The OPEC+ group met last week and failed to agree to a deal to increase future production sending prices higher. Rising natural gas prices also contributed to the energy index increase last week as hot weather in the US caused a spike in demand for power to run air coolant systems. Natural gas prices in the US increased 9.6% as summer temperatures soared. Rising oil prices lifted feedstock costs and had a knock-on effect on our chemical index, which ended last week up 2.5%. Global benzene prices were most affected with supply constraints in South Korea and mainland China driving prices even higher. The average weekly Asian benzene price increased 7.7% as a result. Elements of the MPI showed weakness last week as the correction in lumber markets continued. The sub-index was down 13% meaning lumber prices have now fallen 45% in the last six weeks.

It was a better week for markets as investors focused on the positive aspects of the latest jobs data in the United States. The economy added 850,000 new positions in June, above analyst expectations. Despite the employment numbers the bond market still seems to accept that inflation is likely to be transitory, in line with the US Federal Reserve's stance. Commodity price movements are starting to reinforce this view with a combination of factors -- improved supply conditions, buyer resistance, and less bullish investor sentiment - increasingly pointing to a rally that has run its course. Despite last week's rise, we expect prices to collectively record a modest decline over the rest of the year. Semiconductors are likely an exception while cracks in finished steel prices will be an affirmation that the year-long rebound in commodities is indeed over.