Our Materials Price Index (MPI) increased 3.4% last week, resuming its upward movement after last week's drop. Price declines were comparatively narrow with only six of the ten MPI sub-components increasing. Despite last week's rise, commodity prices have dropped over 10% since mid-October, a change that points to cost pressures in goods markets ebbing as early as the first half of 2022. 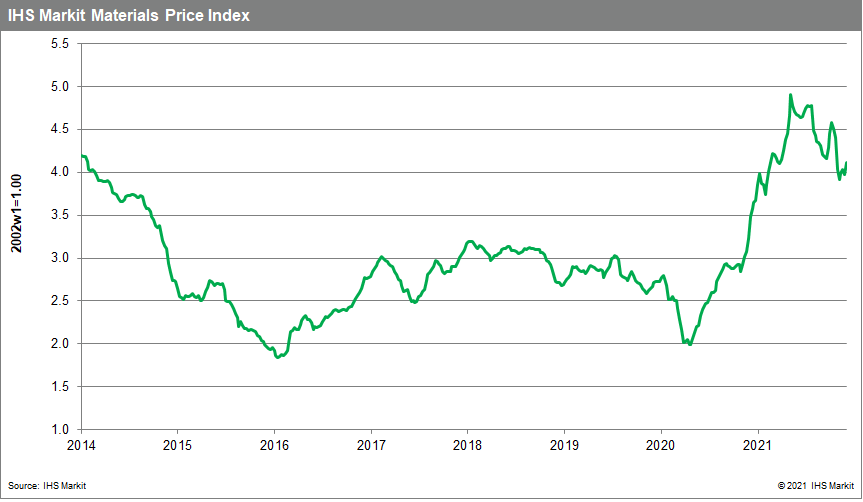 Iron ore, energy, and lumber price increases were most notable last week. Our ferrous sub-index was up 4.5%, a third consecutive weekly increase. Iron ore prices reached $108 per tonne as markets reacted positively to strong import figures into mainland China. Official data showed that iron ore imports increased 14.6% from October to November which was interpreted as a sign that steel demand would increase in early 2022. However, the Chinese economy is facing major headwinds (with the potential collapse of major developer Evergrande a real threat) which will likely reduce the need for steel. Our energy sub-index was up 5.7% last week as the crisis in European natural gas markets continues. Inventory levels in Europe are currently 10% lower than seasonal norms and exports from Russia remain low by historic standards pushing UK spot landed prices of liquefied natural gas (LNG) to $34/MMBtu, up from $30 the previous week. With little change expected this winter, elevated prices could last well into the summer. Prices for lumber also rose strongly with our sub-index recording a 15% gain. Mudslides in British Columbia, which provides 14% of total US lumber, have blocked deliveries; and the Biden Administration's doubling of tariffs on Canadian imports has triggered a fresh spike in prices.

Last week's increase in the MPI chimes with continued market nervousness over rising price inflation in many economies as highlighted by November's US Consumer Price Index report, which showed US inflation reaching 6.8% year over year, its highest rate in four decades. Despite the strength being seen in top-line measures of inflation, IHS Markit remains hopeful about inflation. Notwithstanding last week's increase in the MPI, commodity prices appear to have peaked back in May. With goods markets benefiting from lower commodity prices and better logistics services, and with strong wage pressure not sustained, year-on-year top-line inflation rates are expected to slow by the end of 2022. A definitive change in goods market should be apparent even sooner, perhaps as early as the second quarter, hence our guarded optimism for the new year.