Our Materials Price Index (MPI) decreased 0.8% last week, putting an end to a nine-week rally. The retreat was narrow, with only five sub-indexes retreating; however, increases in the five other sub-indexes were modest. The strength in chemical markets that supported the commodity complex over the past three weeks finally dissipated - prices fell 3.9%. Lumber prices also helped drive the MPI lower, falling 4.9%, their biggest weekly decline since January 2016. 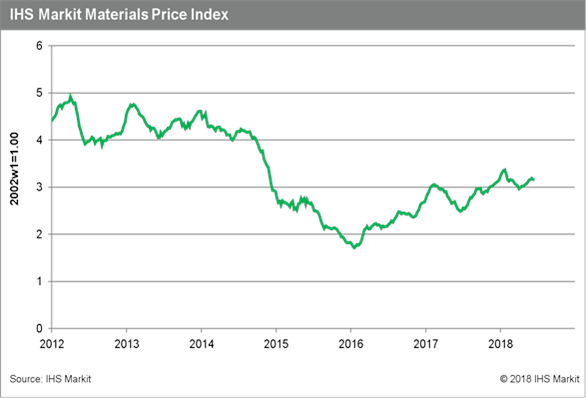 Ethylene prices had increased on the back of several unplanned steam cracker outages in recent weeks. These outages are now being resolved faster than expected, explaining the 9.1% drop in prices. Propylene prices also reversed course last week, dropping 3.1%. Buyers pulling back from the market because of high prices caused the softening. Lumber buyers received some welcome relief last week, as supply to U.S. markets improved after a slow start to the year.

Data releases last week were not supportive of the commodity complex. Industrial production in the Eurozone, which was strong earlier this year, retreated in April. More importantly, several indicators pointed to a cooling Chinese economy, a cornerstone of our range bound outlook for prices. Industrial output, investment, and retail sales all grew less than expected in May, suggesting further weakness ahead for China. Additionally, the trajectory of US monetary policy appears to be falling in line with our expectations. The FOMC indicated last week that they will hike interest rates four times this year, which has long been our expectation. The Fed's action in combination with the data from Europe, China and elsewhere helped lift the US dollar and also weighed on prices. While one week does not constitute a trend, developments last week highlight the headwinds facing a sustained rally in commodity markets. Look for more softness ahead.

Important article @bencasselman @nytimes on the US economy. “Employment has come back to some extent, but the unem… https://t.co/HEICNbutsp

Register from the latest on the progression of the pandemic and the future that lies ahead of us from our Vice Pres… https://t.co/bxevqAdWoQ

The difference in the prospects of the ‘have nots,’ the ‘haves’ and the ‘have much more’ is especially stark in the… https://t.co/86gCDbQpdp