Our Materials Price Index (MPI) rose 0.4% last week, its third consecutive gain. Once again, the rise was narrow, with only four sub-indexes rising, while four fell and one stayed flat. Chemicals were the biggest driver behind the lift in commodity prices, increasing 4.2%. Absent chemical prices, the MPI would have fallen. 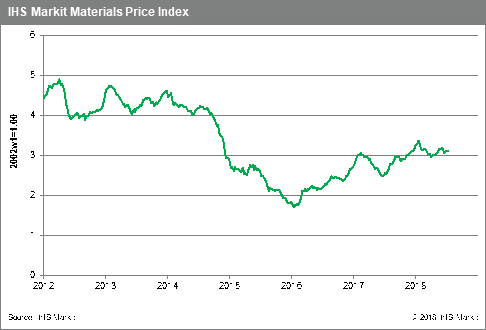 It was ethylene prices, which rose 11.2% last week, that caused the jump in the chemical index last week. Global ethylene markets are currently showing some tightness with demand expected to increase as derivatives production ramps up. Strength in ethane markets also increased feedstock costs for ethylene, adding additional pressure to prices. Chemical prices were an outlier in the commodity complex, however. Nonferrous metals fell amid growing anxiety about trade tensions and a stronger US dollar. The rally in oil prices also ended, with prices falling on expected higher Russian production and an indication the United States is considering releasing supply from the Strategic Petroleum Reserve. Oil demand from China also appears to be on the verge of a slowdown as a tighter tax regime is imposed on independent Chinese refiners and US-China trade tensions worsen.

Macroeconomic conditions continue to point to soft commodity prices. Growth in China decelerated slightly in the second quarter, weighed down by a government debt cleanup and uncertainty surrounding trade with the United States. In the United States, core consumer prices rose 0.2% seasonally adjusted, and are now up 2.2% compared to a year ago. This slight acceleration in core inflation from six months ago would seem to provide the US Federal Reserve with justification for additional rate increases this year - we assume two more. Despite the strength in the commodity complex for the last three weeks, falling oil prices, slower growth in China, and tighter monetary policy in the US and elsewhere argue against a sustained rally.