Our Materials Price Index (MPI) rose 4.5% last week, the largest one-week increase so far this year. Price increases were broad with nine out of ten materials in the index rising. Commodity prices have now risen for six consecutive weeks and are up 19.3% since the end of November, a rally that has now carried the MPI close to its May 2021 peak. 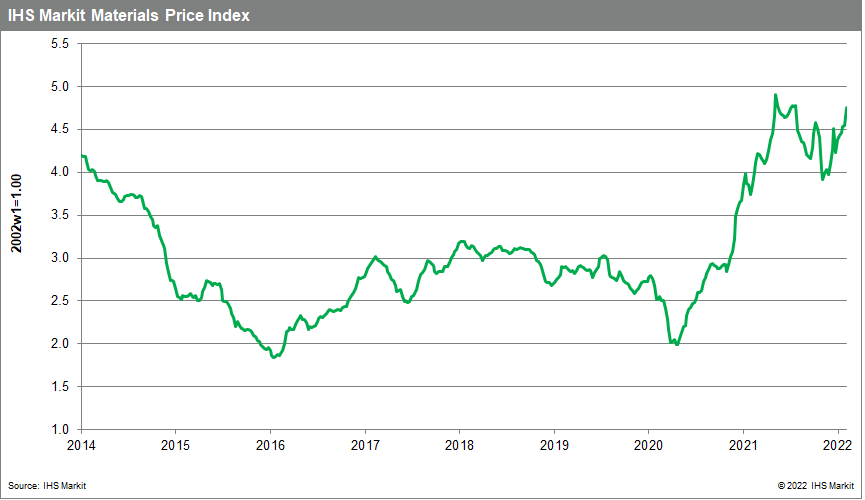 Industrial metals prices soared last week. Our ferrous sub-index was up 7.7% as iron ore prices reached $151 per tonne after the Chinese government announced an easing of its environmental targets. The deadline for peak carbon emissions was shifted back to 2030 from 2025, which boosted the Chinese steel demand outlook. Nonferrous metals also had a strong week with the sub-index climbing 2.5% after broad price rises. Aluminum prices hit a 34-year high of $3,312 a tonne as supply tightened. Smelters are being impacted by high electricity prices Europe and in China by the effects of China "Dual-Control" and zero-COVID policies. Geopolitical tensions are also taking a toll -- Russia is a major commodity producer with elevated risk premiums now being priced into many markets. Prices for lumber also rose strongly with our sub-index recording a 19% gain. Supply was already constrained due to mudslides in British Columbia, (which provides 14% of total US lumber), which blocked deliveries. However, housebuilding demand remains strong and buyers last week took the opportunity to replenish inventories ahead of peak construction season in the spring.

Commodity buyers returned to the market in force last week after the brief respite of the Lunar New Year holiday and opening of the Olympics in mainland China. Buyers became more nervous about supply levels of a key range of materials. This has been exacerbated by geopolitical tensions around Russia and Ukraine given the importance of both countries as large exporters of many hard and soft commodities. Demand assumptions remain strong, but after confirmation that the 12-month change in the overall US CPI climbed to 7.5%, the highest since February 1982, it is unclear how long this sentiment will last.

The latest report on consumer prices supports the IHS Markit expectation that the Federal Reserve will tighten monetary policy several times over the course of 2022, beginning with consecutive rate hikes in March, May, and June, increases that will likely prompt some investor selling.