Our Materials Price Index (MPI) fell 8.4% last week, the second biggest one week drop in the index's 25-year history. Price declines were widespread with all ten MPI sub-components dropping. Last week's drop takes commodity prices to the lowest level since February 2021, although they are still 41% higher than one year ago. 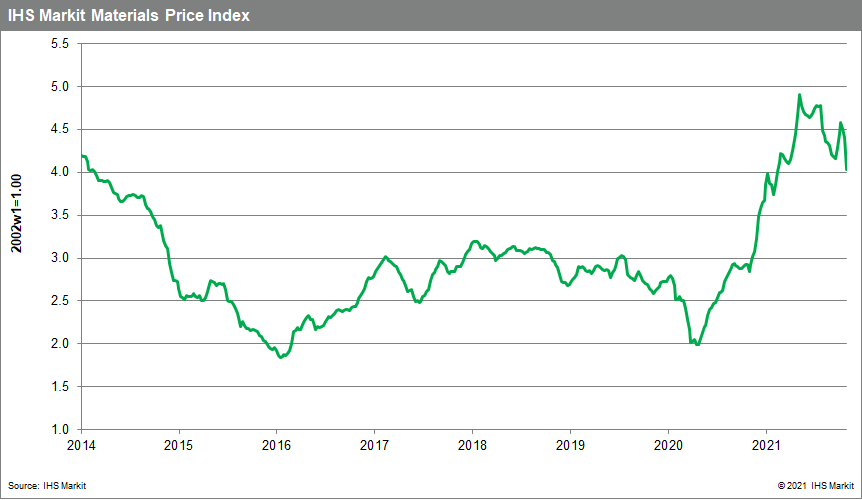 Large declines in energy and metal prices were the biggest contributor to last week's commodity market correction. Global coal prices plunged, dropping 22.1%, the largest drop ever recorded in the history of the MPI, as Chinese authorities announced miners would sell coal at a discount. This intervention by Chinese authorities was an effort to resolve the energy crisis in mainland China, which has been raging since September. Coal production fell because of campaigns to improve mine safety and address pollution levels in the country. This created a shortage, pushed up prices, leading to cuts in electricity production because of the inability of power companies to pass along cost increases. Power rationing and mandated cuts in production for many heavy industries as part of China's 'Dual Control' policy have also created problems in other sectors. Steel production has dropped by more than 20% in recent months, triggering a plunge in iron ore prices. Prices fell to $94 a tonne last week, an 18-month low, having been as high as $220 a tonne in May. Pulp prices have also fallen dramatically as demand for packaging has slumped with the decline in industrial activity. It has been the turmoil unleashed in many markets by conflicting policy directives that prompted the National Development and Reform Commission to intervene in its most direct manner so far, first in the coal market, but also in other sectors to relax production restrictions.

Last week's plunge in the MPI coincides with other encouraging signs for markets. US nonfarm payroll employment rose 531,000 in October, beating expectations, and the unemployment rate declined 0.2 percentage points to 4.6%. Combined with upward revisions to payroll gains for prior months, these developments reveal a labor market on a better footing heading into the fourth quarter. The JPMorgan Global PMI™ (compiled by IHS Markit) also rose from 53.3 in September to 54.5 in October, its highest since July. To be sure, price risk remains on the upside given Chinese policy interventions. The upcoming Olympics in Beijing, a major steel producing region, is likely to mean further production cuts as the government wants to reduce pollution during the games. Last week's commodity price correction, however, makes May's peak in the MPI look increasingly like the high-water mark in the current commodity price cycle. Given the real and growing anxiety about rising inflation rates, lower commodity prices portend a slow unwinding in the cost pressures impacting goods markets and therefore goods prices inflation as early as the first half of 2022.