Our Materials Price Index (MPI) fell 0.1% last week, pausing after an 11-week rally dating back to late April. Over the past three months commodity prices, as measured by the MPI, have registered a cumulative gain of just over 30%. Year to date the MPI is still down 4.8%. 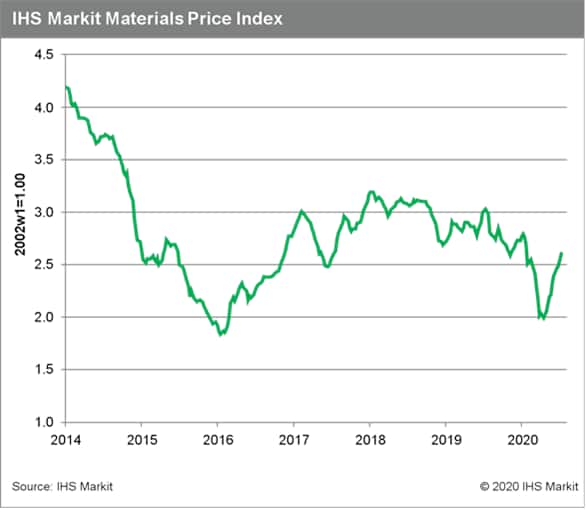 Six of the MPI's ten subcomponents fell for the week, a marked change to the previous 11 weeks, which saw, on average, seven of the index's subcomponents increase week to week. Freight prices led the week-to-week decline with a 5.8% fall. Dry bulk charter rates have surged over the past eight weeks from four-year lows on strong iron ore shipments to China. Added sailings and a dip in loadings contributed to last week's retreat. Lumber prices also fell 2.9% last week, another commodity that saw prices rise strongly in the past second quarter. COVID-19 related disruptions at sawmills in Canada and the US - both in terms of production and in arranging shipments - has seen lumber prices almost double since early April. These supply-side disruptions do seem to be slowly improving and hence additional price declines are expected. Chemical prices were the other large mover last week, dropping 1.5% on a large 20% decline in US ethylene prices. US ethylene prices have been especially volatile over the past two months, rising or falling strongly on plant outages or returns to service along the Gulf Coast.

Commodity markets have been brushing aside any worries about the COVID-19 pandemic and instead have been focusing on a combination of good Chinese data, supply disruptions, a softer US dollar, the promise of yet more stimulus and hopeful news on a vaccine. News on all these fronts for the most part remained good last week. What upset markets at week's end, however, were the tit for tat consulate closures by the US and mainland China, which highlighted anew the simmering tensions between the two countries. More fundamentally, IHS Markit believes a slow end of supply-side disruptions coupled with sluggish demand growth once pent-up demand is satisfied and a period of inventory restocking ends exposes commodity markets to a potential correction in the second half of the year. Put differently, we do not see the three-month rally in commodity prices resuming in the third or fourth quarter.

Our banking risk experts provide insight into events impacting the financial sector in emerging markets in March: I… https://t.co/pgkvZaxw47