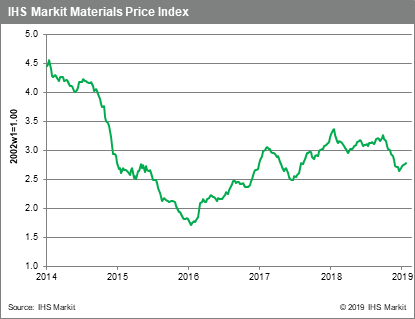 The MPI's increase was its fifth consecutive weekly gain since bottoming in December, though there were significant differences in individual markets. Oil prices were relatively calm, dipping 0.1%, even with events in Venezuela. Chemicals price fell 3.5% w/w as negotiated ethylene contract dropped 8.6% due to seasonally low demand. Freight and ferrous prices both responded to the news that major iron ore producer Vale intends to temporarily close 17.5% of its Brazilian capacity following last week's dam breach disaster. Freight prices fell ~$3 /t for bulk cargoes from Brazil taking the Index down 3.7% w/w. Iron ore prices, however, shot up 3.2% on supply concerns. Lumber jumped 14% as last week's arctic weather conditions disrupted logistics, compounding existing supply tightness in lumber that has been brought about by production curtailments. 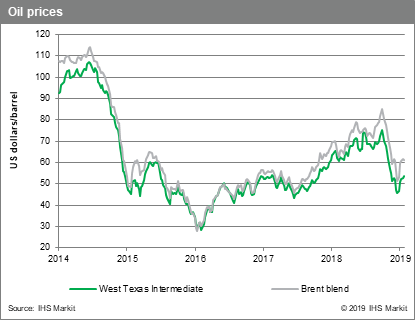 After a speech in December that seemed to indicate a continuation of the Fed's rate hiking cycle, Chairman Powell comments after January's Open Market Committee meeting pointed to a dovish pivot that markets had expected in December. Using words such as 'cross-currents', 'patience' and 'gradual' the Fed Chairman set a tone that surprised markets that had anticipated further rate rises in the first half of 2019. Not only were interest rate rises called into question, reassurances were given that the Fed would adjust "any" of the details of the asset reduction plan (i.e. the continued shrinkage in the Fed's balance sheet) if economic or financial conditions warrant it. This U-turn was clearly motivated by recent market turmoil and signals that the Fed will not plough on with tightening in the face of worsening market conditions. This change in policy has helped improve market sentiment, reinforcing the bounce in equities and commodities since late December. That being said, Chairman Powell also showed an intention to respond to incoming data and other developments giving the Fed flexibility going forward. 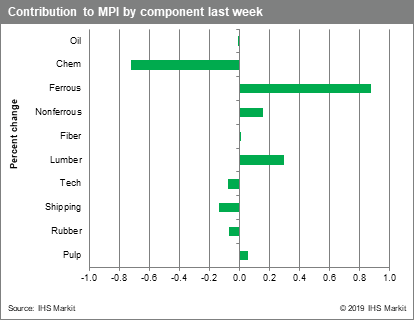 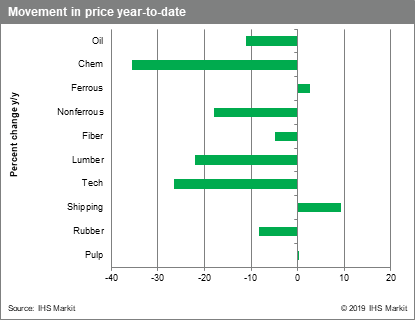